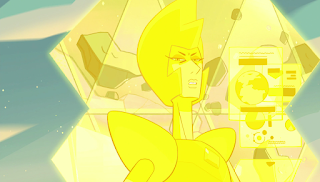 So apparently Pearl called Steven out on his racism, that's a joke I never thought I'd make in one of these.
So, this episode confirms this season finale will not be as epic as the last one, and honestly that's okay. Had this season played like the first season I might've been more bothered, but clearly shortening the episode count was helpful in the long run, as this season, while not perfect, has thus far felt more focused than the first ever did, which is a massive plus. Still, after seeing this and knowing one episode remains, I have to ask, please don't let the actual finale be a dud.

Starting shortly after the last episode, Steven no longer trusts Peridot, assuming the worst knowing she has stolen an important item. As the other Gems celebrate the completion of the drill, Steven decides to interrogate Peridot, who reveals her deep admiration and loyalty to Yellow Diamond, her designated ruler. Annoyed by this, Steven traps Peridot in the barn's truck, while taking the communicator she took from the moon. Steven reveals this to the Crystal Gems, leading them all to once again, hate Peridot, while Garnet praises Steven for his attempts to change Peridot.

As they discuss what to do, Peridot breaks out of the barn using the robot from a few episodes ago (fine, so the episode was useful, but I wish it were better still). She manages to steal the communicator, leading to the Crystal Gems chasing her, Amethyst's helicopter form being the highlight here. After that bit of fun, Steven makes one last plea to stop Peridot, as Peridot contacts Yellow Diamond. The conversation doesn't go as planned for Peridot, as she's insulted, especially once Peridot starts siding with Steven and tries defending the Earth from it's destruction. The argument escalates, resulting in Peridot insulting Yellow Diamond with her favorite insult, "you clod". At that moment the Crystal Gems accept and embrace her as one of them, as the episode hilariously ends with Peridot shocked and fearful over what she has done.

This is by all means a good episode, as well as one that opens new possibilities with a new teammate, but I can't help but feel disappointed. That may largely be the lack of a strong villain, like Jasper in the last season, but it might also be that nothing feels grand this time.  Of course we have one more episode before the season officially ends, but I can't imagine it being a major episode. For what it's worth though, I'm more than willing to embrace a third season, now that I've seen the show improve overall.