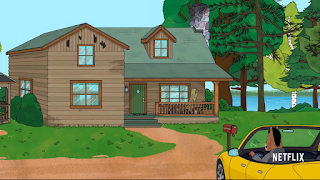 And BoJack is back, for real this time.
Well then, this episode managed to catch me off guard, in more than one way, trust me though, it's good. Going by the first episode, as well as the trailer released a few weeks back, you'd assume BoJack would be out of the picture for a majority of it, but as it turns out, that was an intentional trick. This is largely a BoJack centric episode, with no appearance from the rest of the main cast, outside a few small bits, which works, because it allows for BoJack's arc to be set up for an interesting direction, family life.

Throughout the episode, BoJack is alone in his mother's old vacation home. He tries to restore it, wanting to live alone, but that ends when an old neighbor decides to help out around the place. BoJack bonds with the old dragonfly, who seems to be hiding an obvious dark past, but once that comes to light, we realize it's so much darker and twisted then we'd expect, truly, this season is aiming to be more f--ked up than ever.

On the other side of the episode, we get snippets of the past, in which we see BoJack's mother, Beatrice as a child, and oooh boy is it incredibly messed up. You get your usual sexist jokes, with Beatrice's father making numerous horrible comments, none of which strike anyone as out of place, but it's her mother that really makes the episode shocking. After we learn that Beatrice's brother died in WWII, her mother starts to break down, and without a caring husband, or anyone mature really, she eventually crashes (figuratively and literally). The lead up to this, is one of the strongest moments of the show to date, as we see past and present collide, BoJack and his new friend stealing a vital piece of the vacation home, as Beatrice sees her mother slowly go mad at a celebration.

There's a shocking end to both sides of the tale, which is again some of the strongest material of the show thus far. On BoJack's side, the dragonfly reveals his tragic past, while getting aggressive with BoJack, while the Beatrice side ends with her mother being "fixed", effectively adding depth to a character we once assumed was cruel for no reason. It's in these moments we realize the season will delve more into the Horseman family line, as we realize, that BoJack's poor treatment is the norm, not something that began with him. The episode's closing moments, see's BoJack leaving, returning to L.A. as an effective "F--K YOU" to both his new friend and the audience's expectations, leaving us without an idea of where this might be heading.

We're only two episodes in, and already this show pulls a stand out episode for this season. I cannot express my love for this show enough, with how this episode stands out, I'm convinced this season is only going to continue to go up.