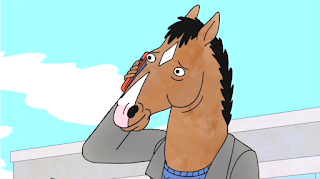 As the latest season closes, so does the mystery of Hollyhock's mom. I know, how weird.
Much like previous season finales, this episode focuses on setting up the next season, which is fine, but it does leave it being one of the weaker episodes of the season. After the incredibly depressing backstory to Beatrice, BoJack remains alone at home, having lost his daughter, as well as his mother, his life is going back to how it once was, quiet, but sad.

The other characters are going through their own things as well. Princess Carolyn is trying to pitch her show, while trying to get BoJack to star. Todd, after giving a pep talk to Princess Carolyn, manages to save his clown dentist venture, while possibly finding asexual love. Mr.Peanutbutter and Diane have perhaps the most interesting story, as they relax and try rebuilding their home. Up to this point, their love has consistently survived, but at the end here, we don't really know if they can stay together anymore, which has been teased throughout the season.

Back with BoJack, upon a discussion with Princess Carolyn regarding her new show for him, BoJack realizes some crucial details. It turns out, BoJack isn't Hollyhock's mom, his father, was her father, making the two siblings. With this new information, he decides to bring it up to Hollyhock's dads, who are still angry at him, which shows how much BoJack has grown, given that he accepts that he won't be a part of Hollyhock's life, despite finally finding Hollyhock's mom. This inevitably leads to a touching, uplifting ending, where Hollyhock admits she doesn't need BoJack as a father, but she would like a brother.

This season of BoJack is another depressingly hilarious winner for the show. While I'll admit the election subplot ends on a weak note, as well as Todd's subplot seems superfluous to the rest of the story. That being said, I'm glad this season avoids BoJack doing some incredibly messed up thing throughout the season, sure he still makes mistakes, but instead of making him go through drugs, or do something horrible, the show lets him grow just enough to show he has hope in him. I can't wait to see where the next season takes this.