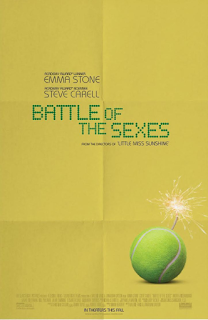 It's a good thing sexism is a thing of the past... right?

Battle of the Sexes, is a film that tackles the true story of a match between a feminist and a male chauvinist, a tennis match that is. Summing that up, reminds me that we are still not that far from this, no seriously. You see movies being made about the past, they'll highlight racism, sexism, homophobia, and to many they're just that, the past. Most filmmakers tackle the subjects, understanding we're not too far from those days, knowing the world still mirrors the more hate filled "past", but to the average audience, they'll be relics of an old world "it's good we know better", the truth is, we don't.

I'll try to restrain myself from talking about political matters too much, but considering I am reviewing a movie about sexism, well, I feel like it's appropriate. Still, this is a review, so I'll be brief, thanks for your patience.

Our society is ingrained with hatred of the "other". The "other" here, referring to anyone not white, straight, or male. Sure, you may find examples to "prove" me wrong, but the fact is, you can't, there is living proof of hatred all around us today, for women, for homosexuals, and for non-white people. Calling us lazy, or inferior proves my point, and acting like it doesn't happen anymore, is exactly why it continues to happen. Much like this film is about a woman facing sexist men, telling her she's not good enough for the audience because she's a woman, despite her obvious skill, women today, continue to be attacked simply for being women. Women are told they can't/shouldn't play video games, because games aren't made for them (false), women are told they are inferior when it comes to coding, (very wrong) they're even told that they're too emotional to properly run a country (bullshit). I believe, like with most films tackling these subjects, that the filmmakers wanted to make the audience aware of sexism around them, after all we've all heard the same drivel from Steve Carell's Bobby Riggs, coming out of the mouths of people we've met. The sad thing is, I know that people will not listen, but the upside is that this is still a good film.

Everyone onboard brings their A-game, with Emma Stone as Billie Jean King as the best performance in the film, I honestly would forget at times that it was her in the role. I mentioned Steve Carell before and trust me, he is solid in this, it may not be the best performance of his, but he plays the addicted gambler role well. We've got a lot a good people on hand in the supporting cast, like Bill Pullman as an incredibly sexist commentator, as well as Sarah Silverman as King's caring, but strict manager, just to name a few. The weak link here though, is Alan Cumming, he's not bad, his role is just odd to me. I'm not sure how accurate he is to the actual designer, assuming his part is based on a real person, but Cumming plays less like an actual person in the group, and more like an addition for King's lesbian affair to be given some positive affirmation. Again, I'm not sure if he is based on an actual person, but I honestly felt like his part was useless in the grand scheme of things, though in fairness, I can't blame the film for wanting a character to accept Billie Jean's love for women, it's harmless and positive for gay/lesbian audience members.

If you haven't picked it up yet, I am not familiar with much of the history behind this, so I'm sorry if I come off misinformed here. If this film is very inaccurate to the truth, I wouldn't know, so I'm not gonna ding it for inaccuracy.

That being said, if there's anything that keeps me from loving this film, it's that I don't think the writing is great. It's not bad, it's quite good in fact, but it's rarely ever as dramatic or hilarious as it sometimes thinks it is. I can't deny it has charm, in fact one of the strongest moments involves a reporter being corrected by King who admits that she never thought women were better at tennis, she just wants to prove they are just as good. Still, I never quite found myself as sucked in by the writing. It's honestly the performances that I felt carried this film, which is fine, but I can't deny that I feel the writing could've used some alterations to make this more effective.

It's the sexism that made this stand out though. I'm not saying this is the only film to tackle it well, but I do feel like it's one of the better films in recent memory to talk about sexism. Whether it's Pullman flat out stating women are factually inferior in a lot, or Carell's Bobby, using women to fed his ego and gambling issues, the men here are awful. The film does try to make Bobby a little more sympathetic because he gambles, which isn't awful, but I imagine some audiences might hate the film for not making him look like a jerk by the end, despite being such a sexist man, Bobby is still "redeemed" in the eyes of his wife. I suppose that's accurate, going by the history, but I still feel the film could've handled that piece of information better.

This was never meant to change anyone's life, I get that, but I think people should look at themselves for how they treat others, in this case women, after watching a film about sexism. Actually, people should evaluate how they act, regardless of  watching films tackling sexist issues. Still, I like this film, and I fully understand our world is hardly different then it was three decades ago, this may be in the past, but it's themes and message are still affecting us.