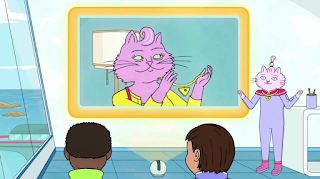 So I guess Clooney really doesn't exist in this universe.
So the weirdest thing going into this episode is the episode's framing device, a future with a descendent of Princess Carolyn, talking about Princess Carolyn. It's not a bad way to frame the episode, it's cute, offers some funny jokes, but it feels weird to use, until we reach the ending that is. I'm not gonna spoil it, but considering the show has centered so much around how we deal with depression, it wouldn't surprise me if some of you see the truth on the framing device coming.

As the episode opens, we're told the episode, deals with a day, where Princess Carolyn had a horrible experience, this becomes a major indicator that whatever happens, won't end pleasantly, no matter how much Ruthie (Princess Carolyn's descendant) insists otherwise. It's a grim statement, that leaves us worrying for the worst, even when the episode shows bright spots for our lead in this tale.

As this is a Princess Carolyn story, we rarely are shown what's going on with BoJack, though he's not excluded from the story (Ruthie's explanation as to why is a cute funny joke on it's own). BoJack's plot involves looking for the records of Hollyhock's mother, which a series of short jokes involving him waiting in line. The funniest thing here though, involves BoJack calling Princess Carolyn, getting her to manage his career.

It's Princess Carolyn's episode in the end though. We see her realizing a family heirloom is not as special as she thought, dealing with her assistant, Judah, not being as trustworthy as she thought, and the culmination of bad things, her pregnancy failing. It's all devastating information, which eventually breaks Princess Carolyn, the depressed character we always see land on her feet, into drinking in her old apartment, now infested with clown doctors (thanks Todd). Ralph confronts Princess Carolyn, as the miscarriage is revealed to him, the ensuing fight, ending with the break up. Our episode ends with Princess Carolyn alone, talking with BoJack, who seemingly had his own bad day.

It's a depressing episode, with a positive cover hiding it's sad nature, which makes this even more charming upon a second viewing. Seeing Princess Carolyn, for once, not on top of things, breaking down and drinking her issues away, is one of the more memorable moments of this season. It can only get worse from here. Not in quality mind you, in events.