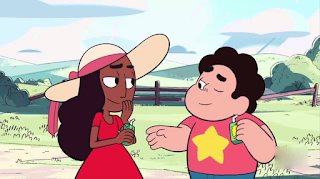 Well this is another cute, though not as cute episode.
Following the last episode, we see Steven celebrate his 14th (no really) birthday. Peridot sits the episode out, because she's more determined to finish the drill, so we see the other Gems, Greg and Connie celebrate the occasion, a cute set up, though it does tackle a question I've wondered for a while, with Steven being a half-Gem, can he truly age? His appearance at the age of 14 suggests it's a possibility, which becomes the central conflict of the episode.

Overhearing Connie and Greg discuss the stagnation of his age, Steven feels a bit threatened by Connie eventually getting too old for him. Using his powers, much like in one of the earliest episodes, Steven gives himself a growth spurt to match his age. The result surprises everyone, but everyone also quickly accepts it, with Connie even enjoying it. As the party goes on, Steven begins to show signs of pain. Eventually even being caught by Amethyst and Greg, who acknowledge what he's doing to make himself appear older may be harmful.

Steven ignores the warnings given to him about his aging, which soon results in him being turned into a baby. What's funny here, is that Pearl, who you'd assume be the first to jump at taking care of a baby Steven, is quick to deny taking care of him. Greg, is in fact the one who turns out to have a solution for the matter, though it ultimately does nothing. Of course Steven is able to get back to normal, thanks to Connie anyway. Our episode closes with Connie accepting Steven for who he is, while Steven shows signs of actual growth with a hair in his chin.

This is a harmless and cute episode, it doesn't advance the story, but it tells a fun adventure, so it's fine. Alright, moving into the next episode, which is hopefully a continuation of the drill story.