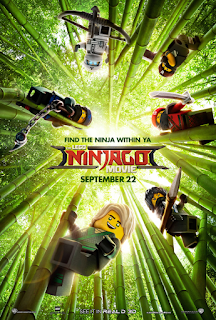 The trailers certainly spoiled the best joke in the movie.


So far the LEGO Cinematic universe has been the best one, outside of the MCU that is. The main reason for this, in my mind, is that the LEGO films aren't focused on continuity, beyond that these movies are made of LEGOs and the story is all in the mind of a child. The newest challenge for this franchise, is to see whether or not it can succeed without relying on nostalgia properties for people in my age range or above, The LEGO Ninjago Movie, a fairly decent movie is what they came up with.

Based on the Cartoon Network show, LEGO Ninjago is a franchise I have no familiarity with, other than it's a thing that exists and kids seem to like it. Given that, I'm honestly impressed that it managed to grab my interest at all, though I'm sure fans of the show may be a bit angered by this, as it clearly deviates from the source material. Still, seeing LEGO attempt to build its brand by going for something originally from them, rather than rely on references is kind of bold, I admire their choice. In that regard, I'd call this a success, even if the movie is the weakest of the LEGO movies released so far.

What makes this weaker than the previous two, comes down to the humor skewing to a younger audience, it's not bad, it's just not gonna appeal to older viewers as much. I imagine part of this is in part due to the material, which is understandable, but I do wish they had tried harder for all audiences. On the other hand, a surprise monster (I'm not spoiling it just cause the trailers did) attacking the city of Ninjago is perhaps one of the funniest gags in any of these movies.

The other weakness, which I honestly feel is the worse aspect, lies in the supporting cast. The previous LEGO films have had great, stand out characters, here, outside of Lloyd, Lord Garmadon and Master Wu, the characters all range from okay to forgettable. No one is bad, thankfully, but it is disappointing that only three characters rise above the "okay" status, with Lord Garmadon being the best of the bunch.

Despite those issues, I liked this, it's very creative, as all the LEGO movies have been, with the animation still being a blast to look at. I admire that they decided to take a risk by doing a movie on one of their own brands. It may not succeed all the time, but it at least shows that the LEGO brand is willing to step out of it's comfort zone.

The LEGO Ninjago Movie is not gonna please everyone, without the safety net of nostalgia, this won't have as much fans as the previous two films in the franchise. Still, there's enough humor and creativity here to make this work, plus Lord Garmadon is bound to go down as one of the best LEGO characters after this. I don't highly recommend this, but I like that it was made, and younger fans will likely love this.