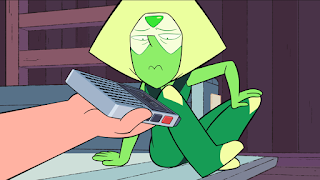 Well that was a weak way to end the season.
I enjoyed this episode, make no mistake of that, Peridot's presence on the show has become an enjoyable addition to the show, with her fish out of water approach to everything. So why is this such a weak way to end this season? Well, because it's a laid back episode, with little in the way of a threat. Not all episodes deserve to be action heavy, tension filled episodes, I get that, but after seeing how much this world was pretty much changed by last season's finale, I had hoped for more this time, instead we got a cute, but ultimately underwhelming note to go out on.

The gist of the episode, is that after the events of the last one, Peridot is still in shock by what was said, but Steven is more surprised by Peridot being comforted by Garnet. The result is Steven listening to her tape. We get a lot of cute comedic bits, including Peridot's meeting with Greg, Peridot trying on clothes, as well as seeing her become a fan girl for a teen show. Throughout this, we see Steven constantly fast forwarding the tape, till he gets to what he wants to hear, which is Garnet and Peridot bonding. The moment itself, is a nice scene where Garnet tries teaching Peridot how to fuse, while being proud that Peridot has finally considered doing so, previously Peridot had considered fusion a disgusting display.

This is all well done, and the metaphor for love is as strong as ever, but I must confess that the meaning behind the material, as well as understanding it, is more interesting than the show. I should probably address this now, and I likely will address this in long form soon, but I need to make this clear, as far as I've seen, I do not love this show. Relax, put the pitchforks down, I think it is quite good, while the messages, themes, subversions, etc. are in fact great. My issue is that, what we are given always feels like a diet version of what it could be. A lot of episodes lack purpose, or strong humor or action, sometimes both, which can be fine, but the show needs to be stronger in at least one area if it wants to be effective in the long run. Fine, Steven Universe is not a comedy by nature, so we can forgive that, fine, the lead prefers to de-escalate the violence,  forgive it as well, so what is this show trying to be? I'm serious, we need something to feel strong about, otherwise, what makes me come back to the show? The themes are fine, but since they're usually subtext, that can't make me desire to watch more, especially when episodes lack purpose sometimes. Don't act like you don't know what I mean, if you've seen the show, you know a lot of episodes feel pointless. Fine, some end up being vital later on (like the robot episode), but if the episodes, can't make me love them enough to ignore at the moment I watch them, that they don't have much to do with the arc, than there's an issue. I can accept that some episodes may prove vital eventually, but those episodes can't be forgiven just because they're eventually important, I would rather they actually be more entertaining right away, so I don't have to eventually forgive it for it's existence. In short, this show needs to be more grand, beyond the themes, because as it stands, I just can't get hooked enough to watch a lot of episodes again.

As said before though, this is a cute episode. While I think it's a weak season finale, I can't deny this season improved over the last season, which I hope is a trend for this show, because I want to love it as much as others do. For now, I'll be taking a brief break from reviewing the show, but trust me, I will be back. Thanks for reading, and I hope you continue to do so, even if you disagree with me on some points.