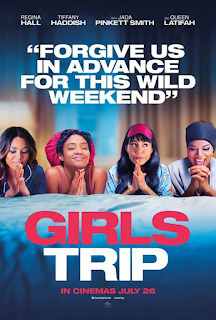 Well, I didn't expect this to be good.

Truth be told, this was not a movie I was looking forward to, I laughed maybe a couple of times in the ads, but not much more than that. So yes, it comes to me as a surprise that Girls Trip is a good movie. I didn't expect much, after all, I am going into this nearly two months after the film's release, the reason behind that being that I was curious, why was this film doing as well as it did? In a summer filled with disappointments (box-office wise), Girls Trip was a minor success story, no one talked about it, but when they did, they mentioned that it was holding up rather well. Now having seen the movie, I can see why, it's a good comedy in a year that so far, hasn't had any.

Sure I've seen funny movies this year, but in terms of straight up comedies, this has been the only good one so far. With a lack of quality movies in the genre, the audience for them have had little to go for, I mean, the closest to this in quality (for me obviously) this year is Rough Night, and looking back at that, I liked the cast, more than I liked the jokes. Girls Trip though, ends up being good on both fronts, this isn't the hardest I've laughed in a film this year, but in terms of comedy, it is the most consistent.

The plot here is pretty simple, four women, after half a decade of not seeing each other decide to get together for a trip to a music festival in New Orleans. Along the way, business minded Ryan (Regina Hall) is trying to seal a contract for her and her husband (Mike Colter) to profit from their self-help books. This becomes a problem, when one of the other woman, celebrity blogger Sasha (Queen Latifah) stumbles upon some information that could ruin Ryan's plans. Along for the ride are prudish, divorced mother, Lisa (Jada Pinkett Smith) and Dina (Tiffany Haddish), a nasty, horny party girl, the four women attempt to have fun, in what's clearly going to be an out of control weekend.

The film's biggest strength is the four lead actresses, they all have good chemistry with each other, while their comedic timing is spot on. Regina Hall keeps it grounded, along with Queen Latifah, but it's both Smith and Haddish that add the more crazy over the top humor, with Smith, providing the film's funniest gag, involving a couple of grapefruit.

While raunchy comedies starring women have become a bit more common place these past few years, not a whole lot have been well remembered beyond Bridesmaids. Personally I wasn't a big fan of that one, but I got the appeal, Girls Trip, is among the better films to be released since then. While I'll admit, some of the jokes probably didn't land as much for me, because this movie will be more relatable to women, I have no problem saying that's okay, much as I enjoyed this, I understand and accept the movie is meant for women, more than myself. Still this is a great film to watch for a laugh regardless of who you are.

If there's any issue I have with the film, it is the length. To be clear, this never drags, but a shorter cut would have strengthen the third act, which admittedly, is a few minutes too much. In fact, the easiest scene to cut is a strange prayer scene near the middle. I've got nothing against religion mind you, I just wondered why the movie stopped to have a prayer scene, I thought it was building to a joke, but nothing it's just there.

All that aside, this is still a fun watch. Not a whole lot of people talked about this, but I can honestly say, it deserves more recognition. I expected a lower rating, but the truth is Girls Tip deserves more than that, it's a gem of the summer season.