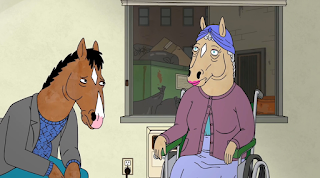 You thought the last episode was dark? Watch this episode say "hold my beer".
Goddamn, BoJack Horseman just keeps finding new ways to get even more dark than previously imagined. It's become a bit of a trend, but the 11th episode always seems to be where the season brings it's darkest/most depressing moments. Season one had BoJack ask Diane if there was any hope for him, two featured BoJack nearly having sex with the daughter of his old friend, three had Sarah Lynn die, and now this. Seeing Beatrice's childhood ruined by her mother's lobotomy, seeing her increasingly abusive father, and closing with her imagining positive images BoJack makes up, just wow is it all sad.

The episode opens during the drive to the nursing home, as Beatrice mumbles nonsensical sentences to BoJack, this eventually change the scenery, with a faceless woman driving Beatrice. Beatrice refers to the young woman as Henrietta, as Beatrice herself grows ever younger. If you haven't caught on, yes, this is an episode made up of memories from Beatrice's deteriorating memory.

We see Beatrice's life, after her mother's lobotomy, resulting in her father having to step in as the responsible parent (if you thought Beatrice was a monster, well, her father proves to be worse by miles here). It's fairly typical, rich girl, rebelling against her father stuff, but it's the details that build to something much more sinister.

As the real world (along with a burning doll) interrupt the flow from time to time, we get a clearer picture of the relationship between BoJack's parents. Their love was never meant to be, Beatrice just wanted to rebel, and keep the unexpected baby in her, to seemingly replace her original baby (more on that in a bit). Butterscotch on the other hand, just went along with it, losing the freedom (assuming he used it) he had to write his novel. They were both horrible, and their pairing created an even more toxic environment for BoJack.

This culminates with the reveal of who Henrietta is, I won't say it flat out, but there's a reason why she's been calling BoJack, Henrietta, around Hollyhock. It's a sad moment, that both shows why Beatrice was upset over losing her baby doll earlier this season (her father burnt all of her things as a child, threatening a lobotomy if she kept overreacting), as well as reminds us that she is a monster, despite not beginning life as such. It's the saddest thing from the show so far, but I'm guessing next season will find a way to top it.

This is the best episode of the season, as well as one of the best so far in the show, it's a powerful episode, that makes us sympathize and hate Beatrice so much. I honestly need a tissue.