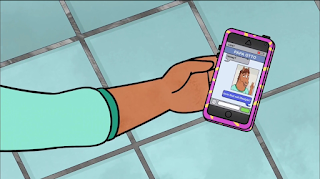 Holy crap was that reveal dark... also it explains the opening.

Well, there you have it, BoJack Horseman has the most fucked up mother on TV now. If there's someone else that is worse, I honestly have to wonder what they did to beat out Beatrice. Up to this point, we've known Beatrice was a horrible mother to BoJack, but this season has done a lot to add layers to her, we've even grown sympathetic upon realizing her illness. This episode hits hard and reminds us that BoJack is right, Beatrice is a monster.

As the episode opens, we're given a strange, but horrifying moment, where Hollyhock, is seen overdosing from something, it's unclear what at first. BoJack, desperate to see how she's doing, spends a portion of the episode in the hospital. He's not allowed in, due to not being a legal guardian, which results in a long wait, that is until Hollyhock's group of gay fathers arrive. This was brought up before, but seeing all the fathers is a funny sight, as we see what each man is about, BoJack quickly leaves, upon realizing what resulted in Hollyhock collapsing. There's an eventual reveal of what's really going on, but I won't say anymore than I've already have.

We also finally get closure on the governor election. Biel's demise comes from Diane revealing that Jessica hates avocado toast, which is funny enough. I'll admit I'm a little disappointed by this portion of the episode, as Jessica Biel ends up hardly being a threat by this point, along with the political humor feeling a bit soft compared to what they were in the beginning. Still, it gets a few laughs, and seeing Woodchuck cheer is among the more charming moments of the episode.

Rounding out the episode, we get a continuation of Princess Carolyn's alcoholic downward spiral. Todd, along with his clown dentists, decide to help her when she desires to pitch a script that coincidentally, is named "Philbert" much like her desired future son. There's so much fun in seeing Princess Carolyn pitch her (okay, it's someone else's) script to Turtltaub, along with seeing Todd try to get his dentist clowns to work harder and better, so that they'd get approval from the Better Business Bureau. This portion ends with Princess Carolyn having to forge BoJack's signature (Turtltaub demanded BoJack star) on the contract, which leads to our closing moments of BoJack deciding to leave Beatrice to live out her final days in isolation.

Certainly a dark episode, and the weakness of the end to Mr.Peanutbutter's story this season doesn't change how good the rest is. I recommend this episode, but be prepared, the next episode hits harder.