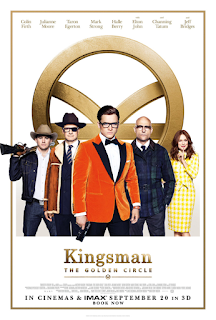 Kingsman: The Golden Circle is not as good as the original, I'm not alone in saying that, but it's true. It's honestly a bit disappointing to see the film be a letdown, after all, the first film was great, this is Matthew Vaughn's first attempt at a sequel to his own work, plus the trailers were a ton of fun, so what went wrong? Let me be clear, this is not a bad movie, in fact, I think it's the best sequel to a Matthew Vaughn film, it just turns out that's not a high bar to clear. The Golden Circle is a fun spy film, it just makes the mistake of trying to go bigger than its predecessor.

There's a fun action movie at the heart of this, with some fun new characters, but all that is dragged by an overlong film. I don't say that lightly, this is one long film, lots of moments are fun, but they also tend to overstay their welcome. The climax of the film is a perfect example of this, fight after fight, all fun, but it also just made me wish it was over so I could just go home.

Still, the new cast is a lot of fun. Julianne Moore is a great villain, she's a drug lord that loves 70/80's nostalgia of the 50's (don't think too hard), making her have a kind, motherly exterior. The Statesman are a fun counterpart to the Kingsman, but I honestly feel their potential wasn't met here, which is a shame because I'd love to know more about them. However, the most divisive inclusion here is Elton John as himself, I liked him, but I get why he gets annoying for others quick.

The returning cast is back, but that's where the other major issue lies, the film doesn't know what to do with them. Eggsy hardly has an arc here, which is fine by me, but late in the film, he suddenly has to learn to commit, which is fine, but it wasn't an issue he had early on. Harry comes back, which leads to some great moments, but I honestly felt like his role gets confused a bit, with Merlin, taking what should've been his moment near the end of the movie. The rest of the Kingsman are also removed from the equation, which is fine until you realize it means that one interesting character is left out of a story that could've benefited from them. The only character from the last film that I feel was improved here is the princess, who returns as Eggsy's girlfriend, she's still cute, and seeing her be more than just a punchline from the last movie does provide some heart to the story.

Still, the big issue is that it all just drags, I feel like another edit would've made this run smoother. Instead, we get a fun but overstuffed sequel, where time, consumes so much but never does it allow for everyone to be fully or properly utilized. Part of me wants to rate this higher, but I know it's issues does hurt the thrills a bit much.