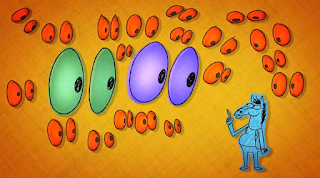 Well BoJack seems to have the voice in my head, good to know.
Anyone who has seen this show up to this point, knows that depression is a major point of the show, so it's absolutely perfect that we finally get an episode showcasing what goes on in BoJack's mind. Much like we see him as a jerk, BoJack's mind acknowledges this, but he can't seem to change, no matter how much he thinks to do the opposite. These thoughts, accompanied by some interesting animation pieces, is upfront in calling BoJack a shitty person, as he continually ditches Hollyhock and his mother to drink.

It's clear, BoJack wants to be a better person, despite always insulting his dementia ridden mother, while consistently disappointing his new daughter, he thinks he will be better, but he just can't escape his own problems. It's here that so many, myself included can relate. Most people, myself included, have never tried making love with our friend's underage daughter, or accidentally killed an old friend, but we know how it's like to think of how not to mess things up, only to do so because we can't help it, depression hurts. We can't stop that, but we can only hope to find a friend who cares, which in this case seems to be Mr.Peanutbutter, who comes to help BoJack find his mother's baby doll. That baby doll by the way, might seem like a weird quirk of the dementia, but it gets much more emotional when we get to the end of the season, just wait.

We get a few subplots as well, with Princess Carolyn working with Rutabaga again, setting a marriage up with Todd and Courtney Portnoy. This plot is weak compared to the main story, but it gets some strong beats, including a plan to keep Meryl Streep in acting, along with Todd further discovering his asexual side. It closes in a predictable way, but I'm glad to see the writing team developing Todd into more than just a slacker with a good heart.

The episode's strength though, is just how well it represents the thought process of someone with depression. We think we want to be better, we even insult ourselves when we don't handle things in the best way possible, but we are never satisfied, even when we've done the right things. Seeing BoJack try to bring some optimism for Hollyhock is one of the show's sweetest endings, even if we know he's lying, that voice Hollyhock admits to having, that stays with us.