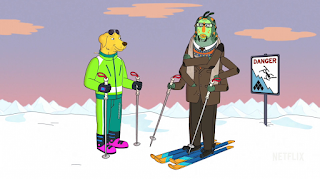 It's time to watch the Mr.Peanutbutter show, yep this is not another person's show.
So, BoJack Horseman's latest season, seems to be it's most topical yet, I say seems, because I haven't seen the whole thing as of this writing. Yes, if you were wondering based on the last season finale, a big focus for this season will be on Mr.Peanutbutter running for governor of California, which, while not a direct allusion, seems to be based on the 2016 election. It's easy to get worried about any show taking on such a subject, but if any show can handle it on a tightrope of subtlety and bluntness, it's this show. Mr. Peanutbutter is clearly Donald Trump, but he's also not, which makes rooting for him uncomfortable, but easier than our real life bigot of a celebrity turned politician. We know Mr.Peanutbutter is a kind soul, but he's in over his head as well, after all, who starts their political career on some irrelevant piece of info, that just serves to be a nuisance to a competent politician? And I promise I'll lessen my Trump references now.

Reading all that, you're probably wondering where is BoJack? A question Diane asks as she repeatedly calls BoJack. Well, while I doubt BoJack will be away for the season, it's safe to say a big part of this will be about how our supporting cast behaves without BoJack's moral (or lack thereof) presence. Princess Carolyn is dealing with a new love life, which seems to be working, while Todd, ever the lovable scamp, seems to be the same, though I imagine his asexual life will be his focal point this season. Realistically Diane seems to be the only one missing BoJack, maybe it's a sign that she's truly the only one who is better with him, as life seems fine for the rest, but who knows for now.

On the comedy side of things, BoJack is as funny as ever. The visual puns and writing is strong, but we even get some unexpected surprises, I'd rather not go into detail, but we get to see how a law is made, justifying Mr.Peanutbutter's challenge to run against governor WoodCharles (get it?). Even Todd's wacky adventure here is among the best things the show has done with him to date.

It's the emotion at the core that makes this show work in the end, yes, even if that emotion just feels wrong, shocking, and messed up to say the least, that is the core of the show. Seeing Mr.Peanutbutter getting farther than he ever should in politics (oh hush) is just the thing to get me intrigued right away. Diane's call for BoJack at the end, is shocking, but expected, because we know what she's thinking, things are about to get worse, and as it turns out, BoJack may be the only person who will understand the situation. BoJack may be broken, but that's not as bad as what's coming, what a great way to start the season.