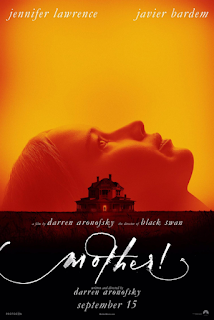 Well that was normal...

The biggest news surrounding this is the cinemascore, which is the rare "F" score, to the average person that sounds like the worst thing possible. I say the average person, because if you know what cinemascore is, you know it's hardly a signifier of  quality, 2011's The Smurfs got an A- for perspective. With that in mind, why did Mother! get an F? Well after having seen the movie, it's pretty obvious why, this is the WEIRDEST FUCKING MOVIE of the year. Seriously.

Is it good? I honestly think it's great, but I get why most audiences will run for the door, this is one uncomfortable film. Even my screening ended with people bolting out of the room, it's that much of an odd experience.

Just to be clear, I am not going to spoil this, I won't, this is a movie that deserves to be seen. Even if you dislike what you see, even if you don't understand, I think you should watch this if you love film. Not just because of the performances, or the insanity, but because it's the product of a director going all in on his vision, to make you think about relationships, the world, and spirituality.

I don't think the messages are hard to grasp, but maybe that's just my interpretation of the film, it seems that a lot of the film can be interpreted in many ways. Religious, or just a psychological look into love between generations, this movie can be what you make of it. Even if you don't get it all right away, the film, allows for you to understand at least some level of what's going on, so I don't think it's confusing, despite how weird it all is.

I fully expect audiences to refuse giving this a chance, the score and knowledge of how weird it is will not go well. All that being said, if you're open for something new, go watch Mother!, it's the year's weirdest movie, how much you like it will be all on what you make of it, regardless if you understand it or not. In any case I definitely recommend it.