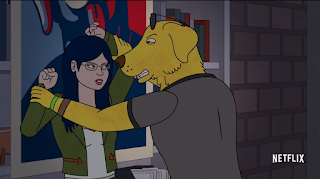 In what is one of the season's weakest episodes (by no means bad though) BoJack and Hollyhock begin to look for Hollyhock's mother, as the fracking issue gets worse at the Peanutbutter household. Again, this is not a bad episode, it's just weak, because once you get to the end of the season you realize not much goes on in this episode that isn't just set ups for later stories. In fairness, yes it's all funny, while providing necessary info, I just wish it didn't feel like an episode we need to go through because it has important plot details. This episode would perhaps have benefitted from a more straightforward focus, but the episode we have still has fun in the threads it offers.

Starting with the weakest story, Mr.Peanutbutter's become known as the fracking candidate, which has lead to Diane being annoyed (though she's not as angry as we'd expect). This leads to some arguments, which eventually even has fracking in the household, resulting in some heated arguments between the married couple. The situation eventually leads to Diane posting an article as a takedown to Mr.Peanutbutter's campaign, which leads to the two fighting and shortly after having intense make-up sex. This isn't bad mind you, I just think with few exceptions, this plot could have been cut from this episode to make room for a bit more moments on the other characters.

Princess Carolyn and her current boyfriend have a funny subplot, that ties a little more to the current theme of the season, family. The two want a baby, but Princess Carolyn has few eggs left in her body. This leads the two into having plenty of items to help them get a pregnancy, including a hilarious watch voiced by Harvey Fierstein. The bit with their ride in Officer Fuzzyface's car is perhaps the most memorable moment of the episode, so I'll give this plot that.

Finally, the most interesting plot is reserved for our lead, BoJack Horseman. Hollyhock and BoJack search for the woman BoJack impregnated, which leads to some interesting characters, including a crazed fan. I honestly wish this plot had more focus in the episode, as it does feel a little too trim, while the mother is not found this time, and that is for the best, a longer focus on the various women BoJack has slept with could've yielded some greater laughs and emotion. Here, it feels a little hollow honestly.

This is by no means a bad episode, but it does lack elements to make this stand out more. It just feels more like an exposition episode, that would've benefitted from less sub-plots. Still, you'll have your laughs and it helps set the story for the rest of the season up, so it's not all bad.