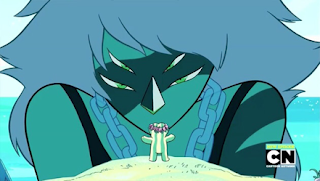 And we're back with Steven Universe season 3. You're welcome.
To catch you up, here's a brief summary. The Crystal Gems have a new member, Peridot, their combined efforts have crafted a tool to stop a looming threat known as the Cluster. While that goes on, a fusion between Lapis and Jasper is at the bottom of the sea, Malachite has been held back by Lapis. All this is going on as Steven continues to grow as a Gem.

I'm not gonna lie, I'm not the most enthusiastic coming back to this show. Don't get me wrong, I think the show is fine, it's got more than a fair share of fun episodes, but after two seasons it's become clear that this show is just not for me. Again, I think it's fine, it's just not something I can get hooked into, even if the characters are solid, the messages are positive and the songs are incredibly catchy, there's just something missing for me. That being said, let's get into a fine episode.

So this episode opens with a call back to a previous episode, as we see a society of watermelon Stevens. It's all cute, as we see Watermelon Stevens farming, growing more watermelons, even starting relationships, it's honestly the best thing in the episode. We soon cut to the real Steven waking up, revealing his mind is traveling to the island in his dreams, learning that Malachite is emerging. The Crystal Gems decide to take on Malachite, while leaving Peridot (who acknowledges the Cluster is starting to emerge) and Steven behind with the drill.

A fight begins on the island, with the Gems fusing together in the hopes of withstanding against Malachite. Meanwhile, Steven decides to help by once again putting his mind in the body of a watermelon Steven, resulting in an adorable rallying of watermelon Stevens to fight against Malachite. Obviously the Stevens are weak, but they provide just the right distraction for Malachite to be taken down, finally separating Lapis and Jasper. The episode closes with Garnet reassuring Steven that he can defeat the Cluster, as the effects are starting to collapse the land.

This was a fine episode, part of me feels like this would've been better as a second season finale, building the tension, while finally giving closure to the remaining Homeworld Gems, but I guess this is fine. I love the watermelon society, but sadly the action just doesn't do much for me, which is a problem in an action heavy episode. Still, I this a good episode, I recommend it, but I'm honestly hoping this is the season that convinces me to watch the show more often than just for the reviews.