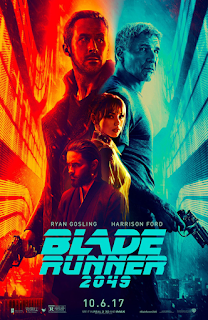 At first I didn't want a sequel, but then I realized who was making it and I loved the idea of a sequel.

I am just not a big fan of modern Ridley Scott, not even gonna dance around that one. Ridley was a great filmmaker sure, I'm not gonna take that away from him, but these days I don't find excitement in seeing his name attached to movies. The announcement of a sequel to Blade Runner did not changed that, even the trailer wasn't exactly exciting for me, but then I found out it was being directed by Denis Villeneuve who has done great movies recently. So then, how does Blade Runner 2049 turn out to be? Pretty great honestly.

I'll be the first to admit that this is a long movie, not even arguing that, but I don't think it's too long, you're just gonna notice it's a long sit through. The length isn't a problem, as again, it's not too long, the film knew how much needed to be in it, but I imagine that its nearly three hour run-time, which neither feels fast or slow-paced will make some viewers impatient. I'll even admit that I did, considering I knew where some things were going ahead of time. That all being said, I can't be mad at the film, because it's long because it needs to be, not because it wants to be, so I get it.

Where the film mainly makes up for it's length is in its visuals, which are perhaps the most beautiful of the year. Earlier this year we had Ghost in the Shell, which featured a similar style, but whereas that was a barely decent film (though the racism is still among the worst this year), this is a great one, which can be seen through the visuals. Suffice to say, yes Ghost in the Shell had the style first this year, but it's this movie that knows how to make it shine with every scene, see it's not just about beautiful technology, but the way it's framed, lit and seen from scene to scene. Blade Runner 2049 makes every scene look beautiful, yet dark, mysterious, and at times unnerving to look at, but that's by design, it makes the film effective in conveying what it wants us to feel. I would honestly consider watching this movie silent, just to take in everything we see on screen, the beauty is amazing.

Of course what keeps it from being just a shallow, beautiful film to look at, is what's inside of it. The cast is great, Ryan Gosling as our new Blade Runner is interesting, even when we start to realize the truth behind him. Gosling stands on his own even when Harrison Ford returns, which I imagine was no easy feat, as Ford is terrific here, easily his best performance in quite some time. We also get some great women, like Gosling's love/avatar played by Ana de Armas, I won't spoil much there, but I imagine a lot of people will be both confused and enamored with their relationship. The best performance though, has to go to Sylvia Hoeks as the film's villain (yes, I know she just works for Leto, but Leto is at best a cameo here), she's menacing and feels like the best terminator we've seen in decades, despite not being one. We get some other strong performances here and there, even some nice nods to the original, all of which help keep the film going.

This is by no means the best movie of the year, but it's beautiful, in visuals, performances and score. I highly recommend everyone watch Blade Runner 2049 as soon as possible, that being said, please don't make another sequel.