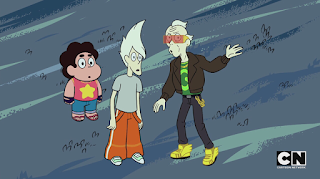 Hey kids! Sometimes your dad's a fucking asshole!
If there's one thing I've really enjoyed about Steven Universe so far is it's characters. Sure, there are quite a few who have only appeared in episodes I do not care for, but the characters themselves are good. While the show has often broken away from TV stereotypes (Greg is a well meaning, kind father, the cool teens are nice people) sometimes you need to reflect on real life jerks, which this episode does.

As seen before, Sour Cream is a dj, which stepfather Yellowtail does not approve of. Steven wants to help Sourcream, working as his roadie, but upon Sourcream's father arriving in town, things go bad quick. You'll recall that Sour Cream's dad was once Greg's greedy, selfish manager, yes Marty, who still seems to be a sleazy guy. Marty decides to host Sour Cream's show on the beach, which Steven at first protests to, but Marty is able to get around that.

Everything seems fine as the show begins, but it all goes bad once it becomes clear what Marty's intentions are. Marty is just trying to sell a product, which leads to an argument from Sour Cream, which then leads to Marty's departure, as soon as he hands Greg a letter he was forced to send him. Sour Cream and Yellowtail make up, it's a cute scene as we see Sour Cream entertain Beach City, but then we get a reveal that makes this episode more than just a filler, turns out Greg was owed a ton of money.

This is a really good episode, it mostly feels like filler, but the good kind, it tells a neat story, while providing a nice lesson about deadbeat fathers. If it weren't for that ending, I'd say this is how you take a break from story arcs, but seeing that makes it clear that this is starting another arc, so it mostly feels like a break, but isn't. I enjoyed this episode, it isn't the best, but the combination of good characters and great moral is definitely welcomed.