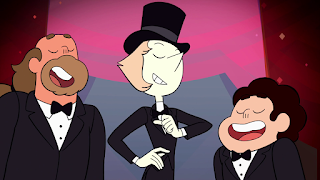 It's the musical episode!
So this was a really good episode, filled with emotions, laughs and even character growth. I've heard about this episode before, but I never thought it'd be a full on musical, having sit through it, I get why so many like it, it's a beautiful episode.

If you missed the last episode, it was revealed that Greg had been paid by his old manager, making him a very rich man. This episode opens with the aftermath, as Greg decides to celebrate with Steven,  Pearl, decides to also join in their road trip. There's lots of celebration, but it all inevitably leads to Pearl having an emotional breakdown, lamenting over her lost love of Pearl. Steven decides to make things right by having Greg and Pearl talk (sing) things out, it's all good stuff. As the episode closes things seem to be back to the status quo as Greg realizes there's a big bill to a lot of what he had for his trip, but we do see Greg and Pearl being closer than ever, so maybe things will be different.

I really love the music in this episode, you can clearly tell the showrunners put a lot of effort to make this episode stand out in the music department. Personally, the stand out song for me is "Both of you", with "It's Over Isn't it" as a close second. I'm not sure if there are anymore episodes like this, but I hope this isn't the only one.

This was a solid episode, easily one of the show's best and I recommend it even if you aren't a fan of the show.