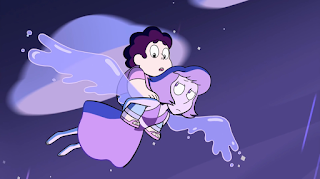 Lapis is the show's best character isn't she?

I honestly think Steven Universe is best when it's just being cute, quiet and laid back, it's not perfect, but you can tell it's where the creators have a much more comfortable time. The action rarely feels as epic as it wants to be, partially due to it's themes of kindness, while the humor is hilarious at some points, but never consistently. So, with Lapis finally safe, we get this, a laidback episode about her trying to find a new home.

I'm not joking when I say Lapis the show's best character, as we've seen her develop with her appearances more than pretty much any other character on display. From her first appearance, she's never wanted any part of the battle going on between the Gems, she desires to go home, which leads to consequences as "home" has changed over time. She doesn't belong anywhere, partially due to circumstances out of her control, but also because she keeps avoiding opportunities for a fresh start, she runs away, without realizing the possible consequences. Remember, Lapis got captured because she chose to run off, despite having made a kind friend, she felt a need to return to a world she hadn't seen for centuries, and as this episode reveals, she was trapped in a mirror because of Homeworld Gems.

To recap, we learn Lapis ran to a world that screwed her over in the first place, but why? She doesn't have a reason to go back, she just does, which inevitably screws her over again. During her imprisonment way back in season one, she refuses to escape, despite Steven having found a way to do so. This imprisonment culminates with her deciding that to help her friend Steven, she must fuse with Jasper to trap said fusion at the bottom of the sea, she could've knocked Jasper into the sea, or just teamed up with the Gems to take her down, but instead she fused.The fusion decision results in Lapis being trapped undersea for months, she could've freed herself at any window, but she doesn't. I mean it's no secret she's meant to be a metaphor for an abusive relationship victim, but all her actions seem to be tied to a desire to want to be trapped.

On the other hand, Steven, being the first kind voice to her in possibly all of her life has brought some change, which we see here. She's curious about the world, Steven show's her plenty, while she learns to take it all in. Finally, Lapis Lazuli is happy to be free, deciding to live in a world that's beautiful, but also has no intentions to hurt her. She's taking the first step to recovering from being a victim, though her anger at Peridot at the end suggests she may finally be standing up against her oppressors as well.

This was a solid episode with beautiful animation, as well as a charming look into the freedom of a character who's never been free up to this point. The next episode seems to be a Peridot and Lapis episode, which I assume may include Lapis dishing some revenge on Peridot, after all, once you're truly free can you even desire to go back? Lapis is no longer punished for her decisions, this was a great episode to open the possibilities for her freedom.