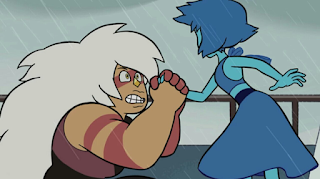 This certainly isn't a story about abusive relationships.
I think part of the reason I like Lapis so much is that she seems to be the character with the most going on for her, case in point, this episode. Before anyone starts asking, no, I'm not saying the other characters have nothing to offer, it's just that their arcs don't seem as important to them as it is for Lapis. The simple fact is that, yes, she has grown the most and continues to grow more than any other character in the show, remember she started as a villain who seemingly knew that the Gems were lying to Steven, now she's alone (to an extent) and cares for no one besides Steven.

This episode starts as yet another laid back episode, with Steven taking Lapis on a ride out to sea with his dad (funny how Lapis doesn't remember him cause they've never directly met). It's as the episode progresses that we realize that's not the case, sure we get cute gags, including seeing Lapis trying to fish, but her constant distracted mind reveals to be an unhealthy desire to fuse with Jasper again. It quickly gets revealed that Jasper has been looking for Lapis ever since, as she's grown an intense addiction for fusion. Lapis denies wanting to be with her again, but Jasper tries proving she's changed to convince her to fuse once more, it's a dramatic and incredibly creepy scene to say the least, as we know it's clearly an abusive fusion. Lapis avoids fusion for the day as the episode ends on a good note, but it's easy to wonder how long that will last, after all Jasper will likely continue hunting Lapis down.

This is a great episode to say the least, while the kids have something cute to look at, the adults, especially those who've dealt with abusive people, will likely find that Lapis and Jasper's confrontation feels all too real. I also imagine Lapis' acknowledgement that she enjoyed the fusion, despite how wrong it was, will possibly remind some audience members of past wounds, the emotions definitely run high here.

Putting aside the metaphors, I find the character development of Lapis to be strong here. I like that she now has trauma over having been stuck in an unhealthy fusion for so long. Starting as an innocent figure who just wanted to be free to go home, now she's trapped in a world she barely understands. She's also seemingly retreating from freedom, which, considering she's never had a long period of freedom up to this point in the show, that's fascinating. Lapis just keeps going up and down, I imagine we'll continue to see her grow as an independent hero.

This was a great episode, with a chilling metaphor for adults to relate to. I'm not sure if we'll continue seeing episodes like this in a row, but for now I'm glad that we're getting stand-out episodes.