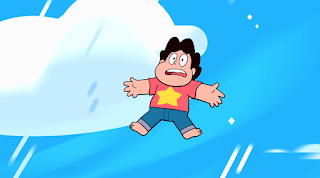 Well this felt like a season one episode, that's not a bad thing necessarily, but it does remind me of why I'm not in love with the show. I'm not sure if I've mentioned this before, but I have seen a few episodes of this show before doing this review run on it. My thoughts for the show have previously been that the show often felt like it was in the pilot stages, I've come to like it more as of late, but I can't deny that it still feels like that at times. This is another episode that leaves me feeling that.

It's not a bad episode, I'll admit to that, I got some laughs, while the plot is cute, it just doesn't leave a strong impression. I'm a bit forgiving I'll admit, due to the episode following the end of an arc, but I do wish they had done more than just another "Steven learns a new power he can't control" story. This time, Steven learns he can control the speed of his falling, much like his mother could, only problem is, he doesn't know how to adjust the speed. While playing with his new power, Steven jumps so high up, with the Gems not knowing how to get him down. Admittedly, how Amethyst figures out that Steven is in the air, is hilarious, but I must ask, why didn't they just grab Steven? Maybe I missed a line, but how was that not an option? If there's anything that really annoyed me about the episode, it was that.

Things are made worse, when Steven realizes his slow landing will result in him missing his donut in the morning. I'll admit, I definitely forgot what made the donut special, I think it was a new kind, but I'm not sure. That the episode manages to make me care so little for what's at stake is part of the problem, but that's okay, because Garnet even seems to figure out the solution as the episode does. There's a happy ending, but the only thing I really enjoyed were the jokes, so it's not all bad, just shallow.

This feels like it was made while the show was finding it's voice, which wouldn't be so bad, if the show weren't in it's third season. It's cute and harmless, but if you want a better episode, please skip this one.