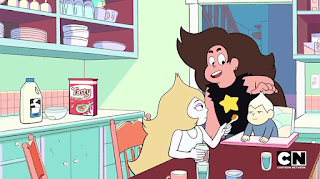 It's another young Greg episode, how cute.

For the most part I do actually enjoy young Greg episodes, they're cute, let us know who Rose was, while avoiding (for the most part) obvious references to the future. If I do have any issues with these episodes, it's that they're awkwardly inserted into the show, granted so are a lot of episodes, but these relay important information about the past, so it almost feels off. To sum up how I feel, these episodes are clearly not filler, but they're inserted into the show as if they were.

This young Greg episode (I'm calling these episodes that now) deals with how he came to work at the car wash, the moment he basically grew up. We're introduced with a catchy song, one of my favorites of the show in fact, as we quickly realize Greg is essentially a bum. He has nothing but his guitar and love for Rose, and a good friend in Vidalia, who lets him sleep at her home. The story gets moving once Greg agrees to babysit a baby Sourcream (adorable). It's all cute hijinks from here on out, as Rose helps out, yet also manages to make things worse, think classic cartoons here, specifically that old Tom and Jerry short with the baby. Eventually Greg returns to Vidalia, with a feeling of growth, which leads to him working in the car wash, somehow, just accept it.

This is a solid episode, it's cute, funny, and reveals some nice information on the past, my only issue is that, as said before, Young Greg episodes are awkwardly shoved into the mix every season. Honestly, these episodes would probably work best as an arc, maybe even as the theme of a season, that way they'd feel more cohesive, well placed, and even more emotionally effective, as they are they feelike pleasant diversions, but they really shouldn't be. To use another show as an example, BoJack Horseman's recent season worked because it's family theme provided a great reason to explore the past of BoJack's mother, this show drops young Greg episodes at random, when they would work better together, maybe serving an arc where Steven learns more about his parents, while eventually grappling with the idea that he is partly made up of his mother (quite literally). Maybe I'm being too critical here, but I sincerely feel these episodes would go from cute to poignant if made as part of an arc.

Still, I can't deny this is a cute episode that works, I do sincerely believe the show needs to rectify it's episode placement choices, but as is, it works, so I can't complain much.