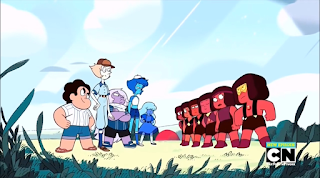 And we have a baseball episode, how fun.

So what's the best way to conclude last episode's story? Have a baseball game of course. This is a silly episode, obviously, but it's so good at it honestly. By no means the best episode of the season so far, this is still one of the more fun episodes of the show so far.

As the episode opens, we see a group of Ruby soldiers get out of the pod that was tracking Peridot. The reveal here leads to our heroes deciding to hide in the barn, wherein Garnet plans to separate, so that Ruby can hide among the Rubies (hope I don't confuse you here). After a series of attempted distractions to the Rubies, Ruby (the good and apparently only one that isn't stupid) along with Steven, decide to start a game of baseball to get the Rubies to leave. The Crystal Gems minus Peridot and Ruby, act as humans challenging the Rubies, which has the good Ruby as a mole for the team.

We get our fun jokes involving the Gems trying to play baseball, but the most charming moments involve Garnet's separated personas, flirting with each other, which also threatens to ruin the plan. Nothing here comes close to the last episode's bit with Lapis being angry over a pool, at least in terms of humor, but I must admit Lapis steals the show here. Despite the Gems doing this to save the Earth, Lapis is clearly having none of it, resulting in some great jokes, as well as further reminder that Lapis is the best character. Despite Lapis being the funniest, Ruby and Sapphire are still just too adorable to really lose out on having the most charming moments. Even as Peridot decides to sacrifice herself (after Garnet ruins the facade) and the Rubies reveal they actually want Jasper, Garnet still closes the episode with a cute response to the fact that the Rubies are idiots.

Closing the season's opening story arc (I think, I'm not sure if the next episode picks up right after this), this is a fun, silly episode that is bound to get laughs. It reminds me of anime filler episodes, much like the beach episode, but comparing the two, this is definitely the better one. Hopefully the season keeps this energy all throughout.