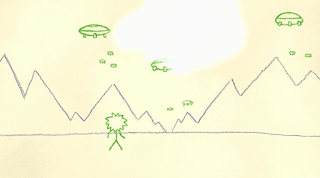 Easily the saddest episode of the season thus far.
Well I'm glad the show finally brought about a great episode in what feels like forever. Does it advance the plot? Not necessarily, but it does add some character progression, as well as possibly set up Steven being able to rescue corrupted Gems. Add to all that some nice emotional moments and the show delivers exactly what I've wanted, a heartfelt episode that plays to the show's strengths and doesn't feel like skippable material.

This episode once again deals with Centipeedle, the first monster fought in the show, as Steven believes he can heal her after his healing abilities become stronger. The Crystal Gems don't believe it to be a good idea, but they allow Steven to do what he believes is right anyway. Things go well at first, but Steven accidentally upsets Centipeedle when he convinces her to draw her backstory out, in what is one of the show's saddest sequences. The eventual reveal here gives further context to the devastating "Gem War", while also turning Centipeedle to a full on tragic character. The episode closes on a joyful note, but it does make me wonder about the other corrupted Gems, are there more tragic stories we've yet to learn? If so, will the show tackle those stories, there's bound to be more material to make me cry.

I really liked this episode, the concept, much like the crayon animation sequence, is sad and effectively emotional. I honestly feel like more episodes should take notes, tell a story with important information, know how to get emotional, and when all else fails, just make an episode with an interesting story.

I absolutely adored this episode, it's sad, but hopeful and beautiful. It puts Steven's abilities to good use, while avoiding to go through the usual plot of Steven being unable to figure out how his powers work. Centipeedle's sad tale has come to a close (maybe) with a great episode for the show, I hope this is a turning point for the show, but even if it isn't I'm glad it exists.