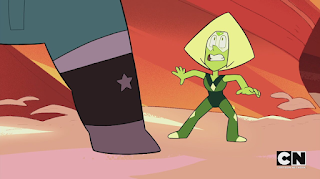 Well this was awesome.
Just to get it out of the way, my only issue with this episode is that it really should've been a double-length episode. If you remember my last review, you'd know how I feel, this episode doesn't feel like a complete story, it should've been the second half, rather than the second part. The two episodes fit together so naturally, that doing it this way shortly after a great double-length episode just feels awkward.

In any case, the episode picks up where the last left off, Steven, Amethyst and Peridot find Jasper, who has been collecting Gems for her own gain. While the other two just want to regroup with the team, Amethyst decides to challenge Jasper head on. The ensuing fight ends up being a repeat of last time (the results I mean, the fight itself is actually pretty cool), Amethyst nearly gives up, until Steven gives her a pep talk, resulting in the reveal of their fusion, Smoky Quartz. As Peridot (in comedic fashion) fails to control some metal bars to fight Jasper, Smoky beats her with ease, until Jasper decides to fuse with a corrupted Gem. The intensity rises, but Jasper fails to keep the fusion going, eventually resulting in her own corruption. Somehow Peridot saves the day, but just as their ready to rest the three find the barn is facing its own disaster.

The action here is some of the show's best, Smoky's ease in pummeling Jasper is among the most fun the show has offered. I've mentioned before that the show doesn't often have great action scenes, but here is a perfect counter argument, seeing the amount of energy and effort on display to make Smoky look like a fun-loving bad-ass is a highlight for the season. Seeing all this cut with a great gag from Peridot, just makes for great contrast, though I will admit it would've been nice if Peridot had some stronger interactions with Jasper. Still, the show has never looked this awesome in combat, I don't expect it to be common, but I liked seeing it here.

This is a great episode, ending with a great cliffhanger, while I would've preferred it as a single episode I just can't complain too much. The action was top-notch, while the character moments were impressive.