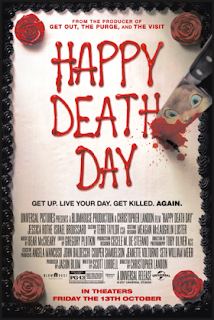 I'd make a joke about how this is like a certain movie, buuuuuut the movie is smart enough to know that.


It almost feels like horror has been getting a bit of a resurgence as of late, sure it never left, but for most people the quality horror films did disappear for awhile. The latest offering for the genre is Happy Death Day, a comedic take on slasher films. I'll admit the film suffers from the rating (this is releasing with a PG-13) but putting that aside brings you a good time, adding to 2017's list of quality horror feature.

Admittedly, if there's one thing that doesn't work about the film, outside the rating, is that once we enter the film's third act the film drags a little. I understand part of the reason for that is that the film essentially pranks us by making us think it's over, but it can't help but feel a bit too long just to trick us yet again. In fairness though, the film's multiple reveals is pretty clever and makes the film one of the most unpredictable for the year. Still, I wish the film had found a way to make the whole thing feel a bit more natural.

Of course, the film's main draw is seeing some fun kills, which the film delivers on, sure they're not bloody, but I enjoyed seeing all of them. A good sign that the film delivers thrilling moments is that I can remember a lot of the kills, I honestly find myself amused remembering each one. I'm fairly certain once this movie gets its home video release you'll find a collection of the best kills, they're worth watching, but I would recommend you watch the full film first, part of the fun is the build up.

Happy Death Day won't win awards, but it's got a lot going for it. The film's strong lead performance, as well as the clever writing make for a fun time, I was originally gonna rate this as average, but looking back it's incredibly fun to watch this. It's no must watch, but I do think you should get around to it if you're a horror fan.