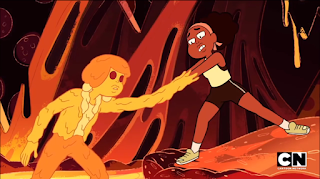 The title is a cute Miyazaki reference.
I am getting really tired of this season, that shouldn't be happening so quick, but it is. No, this season hasn't been awful, nor is this episode, but it's becoming apparent that there wasn't a strong idea for what was to come. We haven't seen the Gems fight monsters or other Gems since the start of the season, and while I do enjoy a good laid back episode, the show should start to build on the Yellow Diamond stuff already. We know there's a history of war for them, ignoring that just makes me question what's even the point. At this point, that we haven't gotten any semblance of a major arc is a mistake as it makes a good chunk of the season skippable.

Despite all that harsh stuff, yes, this is a cute enough episode dealing with Kiki, Kofi's hard working daughter. Steven has to help Kiki overcome her pizza nightmares, as she comes to realize the source of the problem is her twin sister. A cute message is learned about standing up for yourself, as well as sisterhood and a bunch of other stuff that's fine for kids, but feels tiresome for adults.

I don't like sounding like a hater, I really don't, I just want this show to advance the plot, a laid back episode is fine every now and then, but it shouldn't be the bulk of the season. The other problem is that a lot of these just end being average at best, when your show is consistently average, you really need to acknowledge the episode's that aren't are what's worth building on. I want to love this show as others do, but I also want the show to stop taking a break every time a major thing happens.

This is a fine episode, as mentioned before, it's cute and funny enough for a watch, but it's skippable. It's episodes like this one that make the whole thing feel like a pilot season, I hope the show improves, but right now it just seems to be dragging itself down from its own potential.