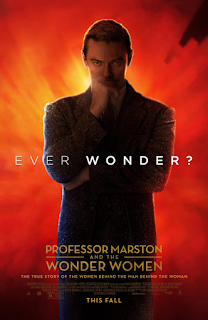 Yeah, Wonder Woman was definitely created by someone with some interesting taste.

In the same year as her movie, Wonder Woman's creation gets to grace the big screen, I'm not sure if that was planned or not, but it is fascinating. Professor Marston and the Wonder Women, tells the story of William Marston, a professor who studied radical feminist ideas, created the lie detector and of course, Wonder Woman. While most biopics aim to either build up their subject, or destroy them, this one seems to acknowledge our subjects were interesting people, whether you hate their choices, or accept them is all up to what you feel about them. I honestly find this movie fascinating, not because the subject is a comic book character I adore, but because the people, the depiction and the actors are interesting.

Luke Evans stars as William Moulton Marston, who remembers his life as he is questioned for the content of his comics. Where the film posits the inception of Wonder Woman began, is when he and his wife, Elizabeth, played by Rebecca Hall, hire college student, Olive Byrne, played Bella Heathcote, as their assistant. As the three manage to create the lie detector, they soon begin sharing love between each other, eventually being kicked out of the college. With little else to do, the three try to live together as a family in secret. As the three raise children, William starts finding new ways to explore his theories and taste, which he then tries sharing through a new and popular medium, comic books. As Wonder Woman's fame rises, so does his controversial life begin to get attacked, largely through critics of the comic.

I didn't even dig through the specifics and I bet you're interested, aren't you? There's a lot of (for lack of a better word) hot moments between the three leads, stuff that honestly puts material like Fifty Shades to shame, even if it isn't really trying to. That's not the main reason to watch it, but I imagine a lot of people will like it for that reason.No, the main reason to watch this is for the great cast, they all give fantastic performances, especially Rebecca Hall, seriously, I hope she gets a nomination. Again though, it's easy to get interested once you tell someone that sex is a major factor in the film.

On the subject of feminism though, look I fully support equality for women, I find people who are against feminism to be some of the most annoying people I've ever met, if you hate the term I honestly don't know what to say, but get educated. While the movie never stops to tell you that feminism is good, it understands that it's important to live with people who are free to live as they please, as that will bring joy, was their lifestyle odd? Sure, but they aren't hurting anyone, so we shouldn't judge. I imagine director Angela Robinson understood that the story she was telling was about people who would still have a hard time living today, progress after all is fairly slow. The movie presents itself as it is, but how you interpret the lives of the leads is all on you. I may view this as a film about strong women who got a creative man to create one of the greatest heroes, but another person may view it as a film about three perverted people, who are rightfully beaten down at multiple points because of their perversions, after all Wonder Woman got her happy end after the creator died. Now I think anyone with the latter view is wrong, as well as hateful, but the film never definitively paints these people as good, outside the ending's text, so I get if people view it as the latter, even if I disagree, and would honestly rather not meet those people in person.

Professor Marston and the Wonder Women is one of the year's best, an interesting look at the lives of fascinating people both ahead of their time, yet clearly of it. I highly recommend you watch it as soon as you can, because as it turns out, the story of Wonder Woman's creator, is more interesting than the fun movie released earlier this year.