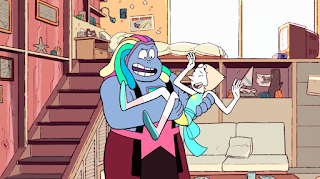 Tonight on a very special Steven Universe...
If you've read my reviews (thank you) you may have noticed that I would prefer some Steven Universe episodes be given longer runtimes, well this episode is like a dream come true as it is exactly that. Displayed as a two parter (though realistically it is one episode) this episode explores a forgotten Crystal Gem, Bismuth. I'll admit, I liked that the show actually teased her way back in season one, it's a subtle touch that shows how much has been planned in advance. My main appeal for this episode though, is the runtime, this episode doesn't feel short, it tells the story it needs to in the amount of time needed, which is why I consider it among the show's best to date.

Starting with Steven playing around (the Gems really are a sweet family) he soon accidentally frees the bubbled Gem in Lion's mane. What appears is Bismuth, an old Crystal Gem that only Pearl and Garnet have met, she's a blacksmith and used to forge weapons for the team. As the three reminisce over the old days, Amethyst shows little sign of trust, while Steven enjoys the moment. It quickly becomes apparent (not to the characters though) that there's something off about Bismuth, aside from her thirst for violence (countering Steven's peaceful approach) she seems to act strange upon any mention of Rose, Steven's mom. The episode showcases a dark truth as it goes on, Bismuth reveals Rose trapped her after seeing her deadliest weapon, a destroyer of Gems. Steven disapproves of the weapon, leading to Bismuth going crazy on Steven, resulting in Steven bubbling Bismuth like his mother, unlike her though, he plans to tell the truth to the others.

As mentioned before, this episode works because it runs longer than the other episodes, allowing for a bigger, more fleshed out story. Bismuth becomes a compelling villain, she isn't out to do evil, but her method in doing so is too aggressive, easy to twist into something much darker if allowed. Admittedly, despite the longer length, I do feel a scene with the Peridot and Lapis would've helped make the episode stronger, but I get why they weren't brought in as Amethyst already filled the role of Gem unaware of who Bismuth is. In the end though, Bismuth was allowed to grow as a character because she was given a longer episode, I'm not sure if we'll see her again, but I do hope so as she is perhaps the show's best villain to date, we know so much within this one episode.

More episodes should get this treatment, sometimes stories need more time to fully land, this is proof of that. This is one of the best episodes of the show to date because it was allowed to be fleshed out.