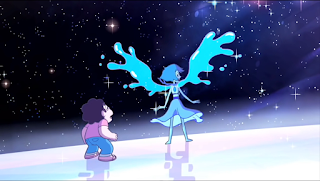 Well that was actually pretty epic.

Continuing from the events of the last episode, this episode sees Steven's world pretty much get turned upside down right at the intro. There's still a sense that we haven't gotten the full picture, but we finally are getting the answers to some basic questions, like what are the Gems fighting, if there are more Gems, etc. we get it here. The main highlight for me though, is finally seeing action that actually feels awesome.

As mentioned before this episode begins right after the last. Steven is being grounded for his actions, only for the town to interrupt his punishment, by revealing the now missing ocean. The Gems quickly deduce this to be the actions of Lapis. To atone for his mistakes, Steven decides to find Lapis; Connie, Garnet, Amethyst, Pearl, Lion and Greg decide to tag along. The trek there is brief, but we do get the funniest gag of the episode through Garnet escaping the van to stop hearing Greg's music.

Once they arrive to their destination, we find Lapis has created a tower out of the ocean. Steven tries to reason with her, but Lapis just won't allow it, beginning to attack everyone, we get a cool action scene of the Gems fighting their water doppelgangers. Eventually Steven manages to get Lapis to agree to a conversation. It's a brief, sweet conversation, leading to Steven healing Lapis' damaged Gem. She thanks him, before leaving for her home world, saving the town, but leaving the Gems to ponder if this might have any negative impact on them.

Outside of the awesome battles, it's incredible we get to understand that the monsters fought before are actually Gems in a corrupted form. With so much revealed, it won't be so bad to see what happens here, so please continue.

Well, that's the first half of Steven Universe's first season I'll be taking a break for a few days before starting the second half so I hope you stick around. Until then, see you.