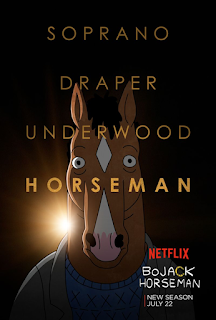 It's always a delight to see Margo Martindale in this show.

Here's a very fun episode, using a neat angle to tell the story. The bulk of the episode is told by BoJack in a conversation between himself and the head of an L.A. Newspaper company. In that sense, this is a flashback episode, with commentary on the events unfolding, which is really interesting, to see someone like BoJack essentially getting therapy, but instead of a therapist we have a woman trying to sell him something, while getting through his vulnerability.

At the start of the episode we find BoJack, for some reason, wearing a giant papier-mâché Todd head. This, along with Mr.Peanutbutter's strainers will pay off at some point. Upon realizing he keeps getting newspapers from the L.A. Gazette, BoJack calls to cancel a subscription he never started, which is where we have our "therapist" for BoJack in the episode.

This leads to BoJack talking about his day (including a hilarious bit where somehow, he starts talking about Diane talking about her day) with a woman only known as "the Closer". From Todd's latest career venture into an "Uber, but for women, driven by women" business called Cabracadabra, to his secret relationship with Ana, BoJack pretty much talks about it all. The Closer, provides BoJack some nice advice, while pushing her newspaper subtly, yet not subtly into BoJack's mind.

BoJack, eventually reveals some more self-destructive info about himself. BoJack, unsurprisingly, slept with Emily in her last appearance, which eventually leads to her leaving Cabracadabra. Meanwhile, after revealing Margo Martindale has been living in his boat, BoJack admits to following Ana home just to see her as she lives, despite her requests for secrecy.

After the conversation finally ends, BoJack decides to make some bold choices of his own (though he still ends up subscribing to more of the L.A. Gazette's papers). BoJack convinces Ana to convince the studio to go with his favorite "Secretariat" poster. That leads to it's own issue, but trust me, seeing what comes of that and Margo after this episode is just perfect.

I really love this episode, from the set up, to it's punchline, it's a real highlight. 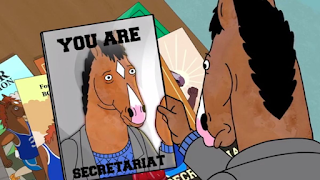