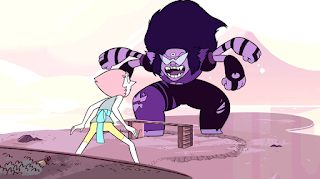 Nicki Minaj gets crazy I guess.

This is yet another fun episode for the show, even if the "coach" aspect never fully gels with the fusion aspect. While I still think that the action beats are not as good as they should be, I'm just glad the episodes are finding better ways to include them into the episodes. It's not perfect, but it feels more natural to say the least.

Our episode begins with the Gems on a mission to destroy some pillars, apparently they disrupt tv, though we never really learn much else. While Pearl wants to strategize a way to destroy them, Garnet decides to fuse with Amethyst in a rather sexual way (look at their dance and tell me otherwise). Pearl worries about the fusion, claiming Sugalite (the fusion name) is an unstable personality, Sugalite however, just decides to wreck the pillars without a care, leading to Steven and Pearl's departure.

Back home, Steven is amazed by Sugalite, resulting in him deciding to make a gym for himself, Lars, Sadie, and his own dad. It's a humorous set up that leads to Pearl protesting it through a catchy song. The humor of course distracts us from realizing the obvious, Garnet and Amethyst haven't been able to get home. Once Pearl notices the gateway is closed off, we find Sugalite returning home via the sea, leading to a battle of brawn vs brain. Obviously Sugalite loses, leading to everyone but Pearl being sore, it's kinda funny.

This is a fun episode, even though again, I don't think the gym story meshes well with Sugalite. There's an obvious message here about toxic relationships bringing out the worst in each other, but to kids it'll fly past them. Though hopefully, kids at least understand the idea of some combinations being too dangerous for anyone's good.