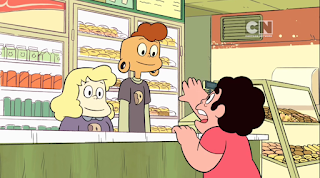 Well this wasn't creepy at all. You know, this isn't the most original episode of the show, but I can't deny how effective it is to see Steven freak out as the town comes off... strange. Basically, this is one of those "be glad for the people in your life" episodes, while also accepting the value of alone time.

The episode begins with Steven disappointed by the Gems as they go off on adventure. A distraction with a golf RPG (no seriously), almost makes Steven forget about his woes, until the Gems arrive, effectively ruining his game with their distractions, resulting in Steven wishing to be alone, which then leads to his mother's room opening for him, granting his wish.

The blissful dream quickly turns into a nightmare. Steven finds himself going through his town, which isn't empty, but the people are acting off, almost as if they aren't really people. This bit is honestly really creepy, it's not the most horrifying thing you'd see, but it's unsettling to say the least. Steven eventually gets out, learning his lesson, while cheering about getting his way (funny), but man is that town segment just creepy to sit through.

This is a great episode, we don't learn much, I'm not sure it's even necessary for the series going forward, but it's effectively creepy.