VALERIAN AND THE CITY OF A THOUSAND PLANETS-REVIEW 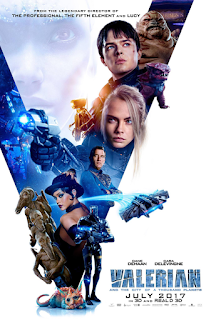 It's not the best Sci-Fi film of the year, but it's definitely the most beautiful.


Director Luc Besson is perhaps best known for his film, The Fifth Element, a film that took a lot of inspiration from the French comic, Valerian and Laureline. Interesting enough, Besson's latest film, is an adaptation of that inspiration, Valerian and the City of a Thousand Planets. It's a film that looks fresh, is full of new visuals that are vibrant and colorful, but ultimately covers up a decent space adventure film.

Make no mistake, I enjoyed the film, it's a fun, pulp film, it just doesn't do a whole lot new or interesting, beyond the visuals that is. The action is cool, the effects are cool, the creatures are interesting, while the humor is actually pretty funny, it's mainly the story where I began to lose interest.  What we have is your typical space heroes, having to stop a threat to humanity, hiding some interesting secrets, but ultimately made a bit dull by a few too many plot threads.

Ultimately, what hurts the movie most, is that we do jump around the plot a lot throughout the film. There's a story here to be sure, but it quickly becomes apparent that this is based on a number of stories. I understand, this is based on a series of comics, but it probably would've benefitted from a less episodic story. At one point we meet a shapeshifting alien played by Rihanna, who actually ends up stealing the show (and not just because of her admittedly sexy show), but she's quickly out of the picture, for no real reason, than because (I'm assuming) she wasn't a part of the next story that is adapted, which is odd as it all tries to be cohesive, but never feels so. A few more passes could've made it feel natural, as is, it just fails, not bad enough to make this a bad film, but enough to make the film feel a bit lesser than it should.

Valerian and the City of a Thousand Planets is not a bad film, it's quite good, but expect your enjoyment of the film to come largely from the visuals.