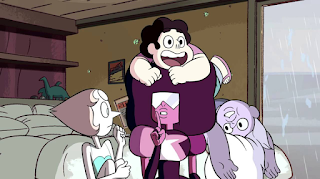 So that's what happens when a Gem dies...

Okay, I gotta give props to this show for dealing with death. Sure, the actual death isn't permanent, but not many family shows even attempt to go this far. Steven Universe, showed one of it's leads, Pearl, get stabbed, that's something impressive.

The episode begins with a pretty humorous homage to Japanese cinema. Pearl, cynically derides how fake it is, leading to her teaching Steven how to fight with a sword. Steven, being his typical kid self, distracts Pearl with his questions on how to do the fake moves from the movie. All those questions eventually lead to a doppelganger Pearl, that Pearl created to spar with, accidentally killing Pearl.

Steven freaks out, naturally, but the Gems assure him that Pearl will be back. Steven, still sadden by the loss of Pearl, decides to use the doppelganger until she's back. After a few moments of the doppelganger, Steven gets creeped out/annoyed by it, resulting in him defeating it, just before Pearl makes her emotional return.

There's not a whole lot funny about this episode, but that's okay, the emotional moments dealing with the loss of Pearl are great. Definitely a recommended episode for the early episodes.