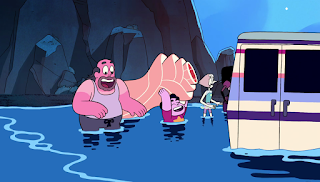 Oh look, Steven's dad has a nice song here.
Easily a noticeable improvement over the first episode. As I've mentioned before, Steven Universe features both action, as well as slice of life stories mixed into one, this episode is a good blend of that. While there is a monster to fight this time, it's more of an impending doom, letting the characters shine. Granted, the Crystal Gems have little to do besides provide minor plot details, while also having a fun gag involving Garnet throwing Amethyst at the monster. It's the focus on Steven that shines though, giving us more of a taste of his life that is charming.

If there's any real star in this episode though, it's Steven's dad, Greg. Greg is portrayed as a screw-up, sure, but what ultimately makes him work, is that he's not your typical idiot father. He cares for Steven, he loved Rose (Steven's mom), he even accepts mistakes, while holding no ill-will to the Gems (who don't seem to like him all that much), he's a charming father. Greg is a rarity among tv dads, and this intro for him really sets that up, he's a nice guy who's just down on his luck. I liked seeing a majority of the episode deal with Steven and Greg bonding as Steven searched for the only weapon that could kill the monster.

Once more, we don't learn exactly what the Gems are up to, beyond fighting monsters that threaten the world, but the slice of life stuff is just too charming to care about it for now. I am looking forward to watching more of this as I continue.