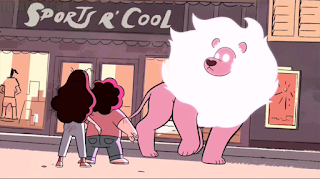 In some states it's illegal to bring your lion to the movies.

It's another Connie and Steven episode, this time Lion is a part of the equation. I can't say I loved this one, but it's always charming to see Lion, while the way Connie and Steven bounce off each other is cute.

There's a lot this episode seems to be hinting at, which is interesting, but serves as a double-edged sword. The episode begins with Connie and Steven going to the movies, with Lion as their ride, but Lion goes on a detour, taking them to a place with a connection to Steven. It's in this mystery location where the intrigue begins. Lion clearly has a connection with Rose Quartz, Steven's mom, but we don't fully know what yet.

The lack of reveals is what kind of  bothers me in this episode. Don't get me wrong, I understand the need to keep certain things secret for now, but something beyond "hidden weapons vault",  would've been much better to keep us guessing. Maybe an inclusion of the Gems here could've helped, but I imagine anything that could've helped this episode would've lengthened it.

As the episode ends, both Steven and Connie have shrugged the whole thing off, while Lion barely seems to acknowledge anything. It's cute, but it just doesn't help my issue with the episode. Still, I'm glad they seem to be moving things along now by having Steven encounter certain secrets from him, even if there's hardly a reveal here.

It's a fine episode that starts an interesting idea, but never pulls any real surprise. Watch this one more for the info it hints, than expecting a good episode and you'll be fine throughout this.