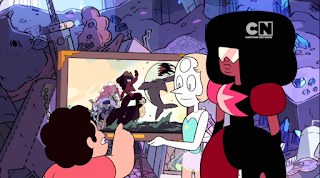 "I thought violence would be the answer"-Garnet

It really feels like these episodes are a bunch of world-building ones, that's not necessarily bad, but that I notice is maybe not good. Relax, this is a fine episode for the show, but I really do want the show to get past this already. The closest example of how I'm feeling about these early episodes, is the intro to most RPGs. You know how most RPG games have this over-long tutorial that even newcomers will feel is a bit too long? That's how I feel here, too much explanation, not enough wonder, or joy. Again, that the early episodes set up the show isn't bad, but that I notice they're building the world more than they tell exciting stories is kind of a problem.

Anyway, this episode's world-building exercise involves the acknowledgement of Gems and aging, which is to say they don't. It's an interesting idea, but I doubt we'll see the show take advantage of this idea any time soon. Steven, being a kid, decides to throw the Gems a birthday party, which they all can't enjoy due to not being able to really understand it all (Amethyst is kind of amused though). I liked this segment of the episode, especially as it reminded me of the Fairies from Walt Disney's Sleeping Beauty, they've been around Steven for a few years, you'd think they'd at least know the basics of a kid party, but no they amusingly don't.

As the party clears becomes a dud, Steven starts to believe he's much too old for this, resulting in the episodes main struggle, Steven is getting older. This leads to some amusing bits, as Steven does things he assumes adults would do, while getting older along the way. The funniest moment, comes from Steven's realization of his predicament while getting donuts from Lars and Sadie, Sadie's reaction to a particular comment Steven makes is particularly hilarious.

Eventually it's Lion to the rescue, as Steven is brought to the Gems. They each try to get Steven young again, leading to my favorite line (read above), but only succeed when they realize his age is based on how he feels.

This is a harmless episode, a funny short about age, I just wish it wasn't so apparent that this is basically all just set up for our characters. Recommended, just wish we'd get past this phase.