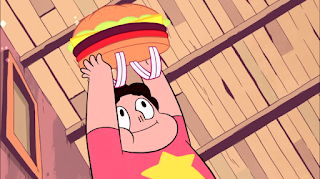 Oh look, the Krabby Patty Mobile comes with a backpack, neat.
So Steven Universe is a pretty mellow show right? I know I've said as much, but that's once again on display here, granted, the adventure stuff is the entire focus this time. I can't deny the charm of a fantasy show that likes to take things slow, but, well, and again not to sound like a broken record, I prefer to have the stuff that's meant to feel exciting, feel exciting. Though in fairness, this is a good episode.

The episode is your basic "new guy goes on adventure with the real heroes, while being underprepared for what awaits", the twist being the joke of the episode. Steven has acquired a cheeseburger backpack, which leads to him OVERPREPARING for the Gems quest. Pearl doesn't seem to want Steven around for the quest, but carefree Amethyst decides he should join to learn something. There's some cute humor to be found, as well as some nice character exchanges.

My only issue remains to be that it is too mellow. Don't get me wrong, I love mellow stuff, 2011's Winnie The Pooh, for example, remains to be one of my favorite animated features of the last few years, but I just feel this show can benefit from embracing some more action oriented beats. That's not to say there's no danger, it just never feels grand, or dangerous.

Another fine episode for the show, and I'm sure some fans will want to revisit this one, because the idea of a cheeseburger backpack being key to saving the world, is incredibly cute.