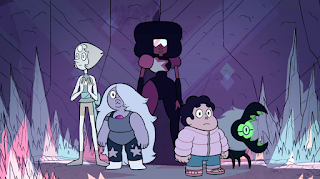 "Mi torta!" Was something I never expected to hear in this show.

This was a downright adorable episode for the show. At first I was expecting this to feel like a lazy retread of the Lion episode, but it actually manages to feel like it's own thing.

Per the norm, the episode begins with the Gems on a mission, suddenly things get too dangerous, reasulting in Garnet sending Steven back home via her bubble abilities. Once Steven arrives home, he accidentally falls on top of another bubble, unleashing a baby version of the first monster we saw on the show, Centipeetle. The Gems worry of its potential danger, but Steven sees it as a harmless creature.

Steven tries to teach the little beast to be like a pet, ultimately making this a very cute episode. The Gems decide to take the little thing along with them on a mission, all goes well, until the Centipeetle is startled by Garnet's gauntlets. The freak out that follows has everyone, but Steven attack the poor creature, but Steven manages to calm the beast down. Eventually the Centipeetle is calmed by Steven, only to sadly, sacrifice itself for him. Soon after, Steven is told his mother tried doing the same with other creatures, but failed to do so, unlike him, thus ending our episode with Steven, learning a new ability.

As mentioned before, this is a very cute episode, it tackles the pet subject again, but it does so in its own way, that makes this stand out just as much as it did the first time. This is a fine example of how to make something stand out, even when it's not original.