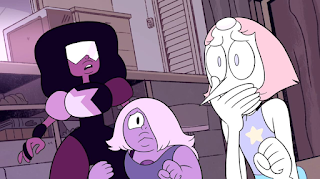 Upfront, no this isn't a particularly great episode, but the ending reveal is definitely the kick this show has needed. Whether or not the show becomes a favorite of mines after this is still up in the air, but the twist here is something that gives the show potential, it gives it possible direction. Prior to this, the show has just felt like any average fantasy show for kids, now we're left with questions, making it feel like more, but let's dig in.

We're introduced with a conversation between Steven and Connie, apparently summer vacation has started for Connie. We get a small reveal here, that Steven isn't aware of school, which makes sense, given that we've never seen any mention of Steven going to school. This leads to Steven convincing Pearl to make a school for him, it's a funny bit with neither of them fully understanding school. Once Pearl realizes Steven wants to learn, she presents to him a magical mirror that can apparently showcase tidbits of history. Suffice to say it doesn't work, but Steven holds on to it, as Pearl showcases her hilarious OCD nature.

Steven meets with a few different townspeople, before realizing the mirror can actually showcase past events. It pulls innocent pranks at first, but soon the mirror begins communicating with Steven. Amazed by the apparently living mirror,  Steven, takes it to the Gems (Amethyst takes pleasure in Pearl's OCD), the mirror refuses to speak, but Steven eventually gets it, to which provokes the Gems. Garnet tries to take the mirror, but Steven defies her, which leads to a pretty shocking reaction from Garnet. After running away from the Gems, Steven is told by the mirror how to free it, leading to the reveal, drum roll please... another Gem.

Yep, it turns out there are more Gems out there as we meet Lapis Lazuli, one of the others. Lapis is angered by the Crystal Gems, blaming them for trapping her for so long, she pleas for Steven to join her on the way home, which Steven can't quite follow, leading to her final message to him being that of not trusting the Crystal Gems. It's a surprising twist that leaves us stunned, even as the episode ends with a joke, but who would've thought they'd pull this within their first season?

Again it's not a great episode, as the episode does wait until it's twist to really hit hard, but the decent humor of the early half does manage to conceal the shock of seeing a new Gem. So overall, this is a must-see episode, if for no other reason to see where the show began it's shift.