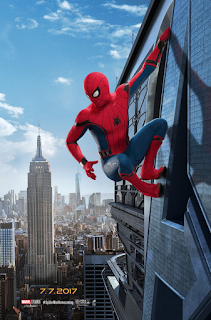 A new Spider-Man reboot in just three years should not be this good.
Alright let's cut to the chase, yes, it's the best one since the second one. There was just no doubt, that this would be worse then either of the horrible Amazing Spider-Man films, I mean how could you sink that far? Spider-Man 3, though I think it's better than most people give it credit for, was also an easy film to be better than. Compared to the first two though, Spider-Man:Homecoming just can't measure up, sorry, but have you seen those lately? They're still solid and easily among the best superhero movies ever made, without a question. So it's the best since the second, but it's not as good as those first two.

I get how that may sound like I dislike this one, but you'll be pleasantly surprised to learn I actually really like this one. There are issues to be found, which I'll get to in a bit, but this is one solid film taken by it's own merits.

Taking place a year after the events of Captain America:Civil War, Peter finds himself bored in his life, eager to adventure with the Avengers yet again. Tony doesn't think he's ready, so until then, Spider-Man will stay as a local hero. Things get messy though, when a group of arms dealers become more open, resulting in Peter, trying to solve the mystery, as will as stopping the leader of this group, Adrian Toomes, the Vulture.

It's a pretty basic plot, as well as a charming one to sit through, how I wish that the structure felt that way though. While I do enjoy the high school aspect of the film, there's just so little time devoted to that, I honestly would've preferred an action scene, or two would've been cut to expand on that. For example, the movie gets its title because of a third act homecoming dance, but there's so little build-up to it, I honestly didn't even care about it, just a tad more devotion of time to set it up could've fixed this. With so much going on, regarding the "Spider-man" side of things, I do feel some of the human charm was lacking. Still, the hero stuff works, Holland is really funny and entertaining in the film, while Michael Keaton as the Vulture turns out to be one of the better Marvel villains, largely because we understand him, while being terrified of him.

The characters who do feel unfairly minor in their roles though, are unfortunately the two I think should of played a much bigger part. Marisa Tomei is fine as Aunt May, she gets away with one of the film's biggest laughs, but she's in it for so little, I kept wondering why is that? She's an important figure for Peter, as well as one of the few mother figures in comics that has a large impact on the hero's life, she should've been in it for more. Peter's love interest this time is Liz Allen, played by Laura Harrier, but outside a few scenes, there's really no interaction between Peter and her that convinces me that this was a worthwhile relationship to look into, that is outside a spoiler I won't reveal about her. I really wish the film had devoted more time to these two, they're lacking, yet I feel they shouldn't be.

Still, I think the cast here is solid, Tom Holland may be the best Peter to date, as mentioned before Keaton is great, while Robert Downey Jr. is fun in his extended cameo, yes, he's not in here as long as you'd expect. We also get some really good supporting cast members here. Peter's best friend, Ned, played by Jacob Batalon is an absolute scene-stealer, delivering the film's funniest line, but I imagine Zendaya as Michelle, will be a favorite for many, especially younger viewers.

Overall, I really liked this one. Sure, I think the structure needed some tweaks, but the cast was fun to watch, even if some deserved more screen time. Spider-Man:Homecoming is definitely one of the better movies out in theaters right now, even if I felt pretty old seeing a Spider-Man that was younger than me.