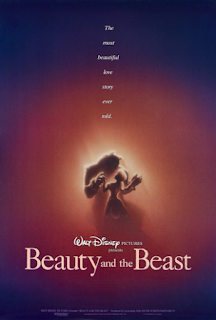 Well, a tale as old as time should definitely be looked at every now and then right?
I have gone on record saying I am not the biggest fan of this movie-wait! Don't crucify me just yet. I do like this movie, make no mistake of that, but I just can't join the chorus that says it's the best, if not among the best Disney films. There's plenty to like, but I've never fully been on board with everyone else on this one. So, with all that being said, sure, I'll review Beauty and the Beast, the Disney animated one, weren't things a little more fun when I didn't have to specify that?

The plot, if you've forgotten, deals with a selfish prince who is cursed into looking as ugly as his soul,  while his servants become objects around the castle. The Beast's (as the prince is known as) only possible cure, is to get a woman to love him before the petal of an enchanted rose drops. After an encounter with an old man brings a woman to his castle, the Beast finds his chance to be human again. Thus, everyone in the castle tries to bring out the best in the Beast, so that the woman, Belle, can fall in love with him.

Looking at that plot, you'd assume that the Beast is the main character, he is not. Belle being our lead, is something I've always had an issue with, don't get me wrong, I think Paige O'Hara is great in the role, I just don't get why she's our lead. The Beast drives most of the story, yet he's not the main character, nor does he get his own song here? That's always kind of bugged me. Again, don't get me wrong, Belle is a fine character, in fact, after so many years I've come to respect her more, she's the first Disney princess to not be motivated by love, even if she does fall in love by the end. The problem is, she's just kind of boring as a lead character, she doesn't change, nor does she drive the plot. Sure, a few of you might point towards Ariel, from The Little Mermaid as being like that, but the thing is, she may not change much (her father does), but Ariel is the reason that the movie goes from point a to point b, she is the reason that things happen in the story. Belle, at most, is an interesting character, but not an interesting lead, she lacks goals to really move the plot.

Now that we have that out of the way, let me remind you, I do in fact, like this movie. The supporting cast is great, pretty much everyone can point to Gaston as one of the best Disney villains, he really walks away with the film. Of course, the Beast's sidekicks are also highlights in the entire Disney library of sidekicks, Lumiere, Cogsworth, and Mrs. Potts are fun, creative and brilliantly written, along with all the other servants, they really do stand out in Disney Animation.

Of course, the Beast, is one of the best designed characters in animation history. Quickly changing from appearing silly to terrifying, we can feel his moods, his reactions, what he thinks, it's impressive just looking at his rage quickly turn into guilt. It's seriously a shame that the Beast didn't get his own song in this version, because that is admittedly, one of the few things that the recent live-action film does right.

The music is charming, even if I don't like it as much as others. I do accept that my general feelings towards the songs are my own, but while I do think numbers like "Be Our Guest", "Beauty and the Beast" and so on, are fun to listen to, I'd be lying if I said they were my favorites, I can't quite put my finger as to why I don't love them, I just can say they're not as catchy for me as some other Disney numbers are.

Look at the end of the day, I know my opinion doesn't matter as much as I want it to, so even if I think this movie would barely make a top 20 best Disney animated features list from me, I know most of you love it. Admittedly I still find this this to be a great film, one that I guess I'll never fully get, but I can acknowledge it's solid, and I get why others love it so much. Go watch it if you haven't, and watch it again if you have, even if I don't love it the same way everyone does, I don't mind watching this every now and then, which speaks to it's quality.