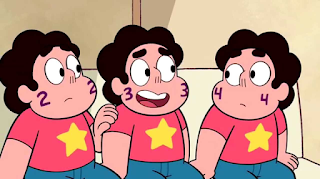 Well that was a bit unexpected.

It's always nice to see shows go on unexpected directions. What starts, as a pretty average time travel episode, becomes something incredibly wild, I actually found so much joy by the end. Granted, to find that joy, I did sit through a pretty standard first half, but I'll take it.

Much like other episodes, we see the Gems on an adventure at the start, they're trying to find a specific sand timer, one that can manipulate time. Amethyst messes things up, resulting in a quick leave, but not before Steven decides to grab a souvenir, a tiny sand glass timer. As they return home, Steven realizes he has to play with his dad for the town, but an accident renders Steven's dad unable to attend the concert. Leading to Steven, accidentally activating his souvenir, traveling through time.

At first, I felt like that was gonna set up a basic plot, Steven repeatedly going back in time to stop his father's accident, possible fun, but not unique. I was wrong, instead we have Steven create a band of himself. And just when you think you know where that's heading, boy does this episode go nuts, suddenly the other Steven's wanna attack the original Steven, resulting in constant time travels, all the way through, it's all just funny and bonkers that I just loved it. This gets even funnier once we get our resolution, I won't detail it, but Steven turns the events into confusing and kinda dark lyrics for his eventual performance, it's hilarious.

I didn't expect much by the first half, but once the episode goes nuts with it's premise, it's just too fun. You definitely should watch this one.