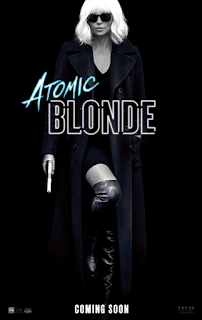 Yes, that one bit in the trailers is still hot, let's move along.

Atomic Blonde was one of the movies I had high hopes for this year, I mean, if you've seen the trailers, you know exactly what I mean. Unfortunately, all those high hopes I had from the trailer let me down here. Don't get me wrong, this movie kicks enough ass for me to recommend it, but the finished product never achieves greatness.

Charlize Theron plays the badass spy, Lorraine Broughton, who is out to retrieve a list that threatens plenty of Intel agents. This is going on just as the Berlin Wall is reaching it's final days, but tensions are still high, making it a dangerous place for Lorraine to be caught in. Trouble arises quickly, when another spy, David Perceval played by James McAvoy enters the mix. With no one to trust, Lorraine finds herself in a succession of danger, even with the help of David and Sofia Boutella's Delphine, the chances of survival are slim.

Realistically you are only going to this one for the sex (which, yeah, I can't say I wasn't thrilled by Theron and Boutella getting it on) and to watch Theron kick ass, which she kicks more than anyone else I can think of in the past year. The sad thing there, is that if you've watched any trailers or ads, you've pretty much been given all the best beats of the film. While the film still offers enough action to keep you hooked, I couldn't help but just think "wait we saw this already" throughout every fight, it kinda loses some impact with that in mind.

The other issue with the film, is that it's so damn predictable. From the moment we are introduced to certain characters, we know where their story is headed, I won't spoil them, but the film does multiple times before the story does. This is a movie being told to us via interrogation after all, so we already know certain things are bound to happen, or not happen.

Still the action is just incredible to watch. I especially love the use of the film's soundtrack, it's a really nice touch to every fight, it's certainly a stand out for the year in that regard. Charlize Theron not only proves she's an action hero, she's among the best of the 21st century with this movie alone.

Atomic Blonde is not great, and while it's partly because it's a victim to it's own marketing, that wasn't the only issue of the film. I recommend you watch it if you need a kickass time, but don't expect it to change your life. Of course, it wouldn't surprise me if this turns out to be a big hit for women, who definitely need more kickass heroes. Either way, go see this one, you'll enjoy it.