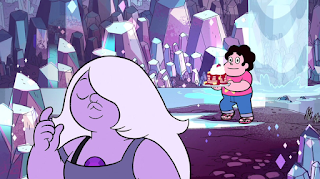 Somehow, I feel this episode is supposed to feel like a meme.

Upfront, I really didn't care for this one. While the last two episodes felt like genuine steps forward, this one felt backwards, for the most part, this episode removes the action element, in favor of just dealing with a small dilemma, Steven wants to share breakfast with everyone in the house. It's a plot I'll admit to liking, if Steven's insistence to "together breakfast" wasn't so annoying.

The whole episode is Steven chasing the Gems in their rooms, which should be charming, after all he's an innocent kid who doesn't know any better, but it just felt more irritating. There's an attempt of making this enjoyable, largely by the cute/absurd name "together breakfast", but for me it just reminded me of how annoying a kid can be at their worst, rather than making me laugh at odd kids can be at their most innocent.

That Steven comes off annoying, is not helped by Steven eventually causing a last minute issue in the episode. He fixes it, but I can't help but feel less than forgiving that it was his own mistake that caused the problem.

You can skip this one.