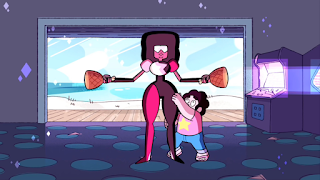 This episode is pretty disposable. I'll admit it's a funny episode, at least when we get the arcade gags anyway, but I'm already forgetting it as we speak. Per the norm, the action is just kinda there, but at least the episode runs as long as it should. There just wasn't really much here, beyond the jokes involving the Gems not understanding how the arcade works.

Perhaps the episode could've worked if it had more focus on the arcade, letting this be a silly episode. You see the big issue in constantly adding these threats, is that it keeps making me wonder why they even fight these creatures, beyond saving the world. The other issue, is that the action takes away from what was working, the humor and characters.

We don't need an end of the world scenario to force Garnet away from the game she was playing, we just need to acknowledge she's stuck on it. The humor could've carried that moment better, than giving the episode a last minute battle.

Sorry, I laughed a few times, and yes they were good laughs, but this wasn't worth sitting through.