SCOTT PILGRIM VS. THE WORLD-REVIEW 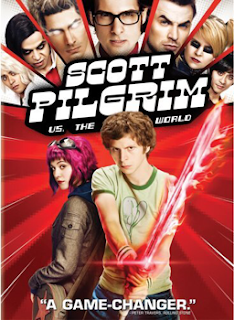 I decided to revisit this, and thanks to your votes on the twitter poll (follow me @Saicam_Films), I'll also review it.


If you're looking for another critic heaping praise to this Edgar Wright directed film, sorry, you're in the wrong place. I tried guys, I truly did try gals, but I just can't find myself loving this. Back when this first hit theaters, I was excited, a movie about games, manga, nerd stuff in general, how can I not like this? Well, I missed it on the big screen, but caught it when it hit blu-ray, suffice to say, I was disappointed. The movie was just annoying to me, I couldn't care less for Scott Pilgrim's plight, the jokes rarely landed, overall I found myself just reading the comic, which I actually enjoy quite a lot. Seven years later (coincidental that I'm reviewing this on it's seventh year) I hoped watching it again might change my mind, I'm sorry to say it does not.

A brief description of the film's plot is in order. Scott Pilgrim is a loser in a band, he's currently dating a high schooler, as a way to deal with his last break up. His life changes though, when he encounters a mysterious girl named Ramona Flowers, stricken with love, he pursues this new girl. Things get rough though, when he realizes he must fight her seven evil exes to win her heart. Video game, comic, and anime references come together for an adventure through a young, modern guy's eyes.

Let me be clear, yes there are parts of this I like, but not enough to put this above "passable" as far as entertainment goes. Scott Pilgrim Vs. The World plays to its audience, So much points to me being a fan, but, I just honestly am not into whatever the movie tries to do to appease me. I'm not sure if it's how it's all put together, but the movie just does not work for me. I like the comic this is based on, I like the video game tie-in, I even like the basic subject of parody here, but somehow the concoction of director I really like, source material I really like, and subject matter I really like, all amounts to a film that disappoints me now, every bit as much as it disappointed me then.

The biggest factor of me not liking this, comes down to it's lead. Michael Cera has been good in some films, here, he really feels limited, despite the Scott of the comics being a bit of a cocky, self-righteous character, here he just comes off whiny, as well as kind of horrible. Yes, the Scott of the comics could also be whiny, as well as horrible, but those weren't his defining features, Scott is by all means the loser, who somehow still finds ways to appear like a bad ass, at least he thinks he does. Sure, adaptations must make changes, but by just making Scott a whiny, horrible guy, we lose charm, we lose the reason to care whether or not he succeeds. Even then, the film does a poor job to make us sympathize with him, he dates an underage girl, cheats on her,shares little real chemistry with the girl he chases after, while still expecting us to feel like it's okay because, because. Scott's just too much of a jerk, which makes the ending (which I won't spoil) worse, we can't love our hero, if he's growth is rushed and barely addressed by the end.

What also hurts the film is the writing. Admittedly this gets better around the 50 minute mark,but by that point, why would we want to stay? For nearly the first hour, everything is just this slog, of annoying dialogue that tries to be funny, but just feels too absurd to really enjoy, it's annoying and shallow. The chemistry in the romance should come from the dialogue, but whether it's Scott and Knives, or Scott and Ramona, it never works. Scott and Knives just come off creepy together, largely because of the age difference, also because Scott, comes off like those douchey white guys who think they know everything Asian, just cause they've seen anime. The dialogue between Ramona and Scott fares much worse though, whereas Scott and Knives you can kinda see a sense of how they connect, Scott's dialogue towards Ramona suggests she's only interesting to him because she appeared in his dream. Ramona's lines suggest no real reason that she likes Scott, other than because she has to for the movie to continue. Without spoiling much, at one point Ramona says Scott is just another evil ex waiting to happen, which never really gets proven wrong in the movie, sure he doesn't become an evil ex, but everything we know about him suggests he very much could become one.

Moving away from the bad, fine, there are good things I can acknowledge here, even if it's not as much as the bad; but hey, I notice it now more than I did when I first saw it. So who knows, maybe a third viewing a few years from now will finally convince me to love this film. The visuals are great, while I don't like much of the writing, I can't deny the editing, the effects, and fighting are beautiful to look at. Even the way the actors move just feels hypnotic to look at, it's really well done.

Along with that, the sound is great, it really does make it all feel like a game on the big screen. I love the use of various sound effects and melodies, it all makes it feel unique, despite not being an original property at all. It's solid work.

Good visuals and music just can't save this though. I like the action, but it's rushed through the last hour, which is perhaps the film's biggest flaw, outside a poor choice for Scott, it is rushed. Look, I get it, the comic has too much material for one movie, but surely they could've made this feel smoother, especially considering that it doesn't even follow the comic to an exact degree. Everything comes too fast to sink in and appreciate, but at least it makes the film more fun than it's dull 50 minute start.

I know I'm the odd man out here, so if you love this movie, fine, but I don't. It's certainly improved on a second viewing, but it takes too long to actually become a fun sit through. Even when it is fun, it's too rushed to fully appreciate, if you're like me, check out the comic, or play the video game, they're far better than this movie. Sorry gamers, sorry anime fans, but this is not a masterpiece, Edgar Wright has made some outstanding films, but Scott Pilgrim vs. the World is just not one of them.